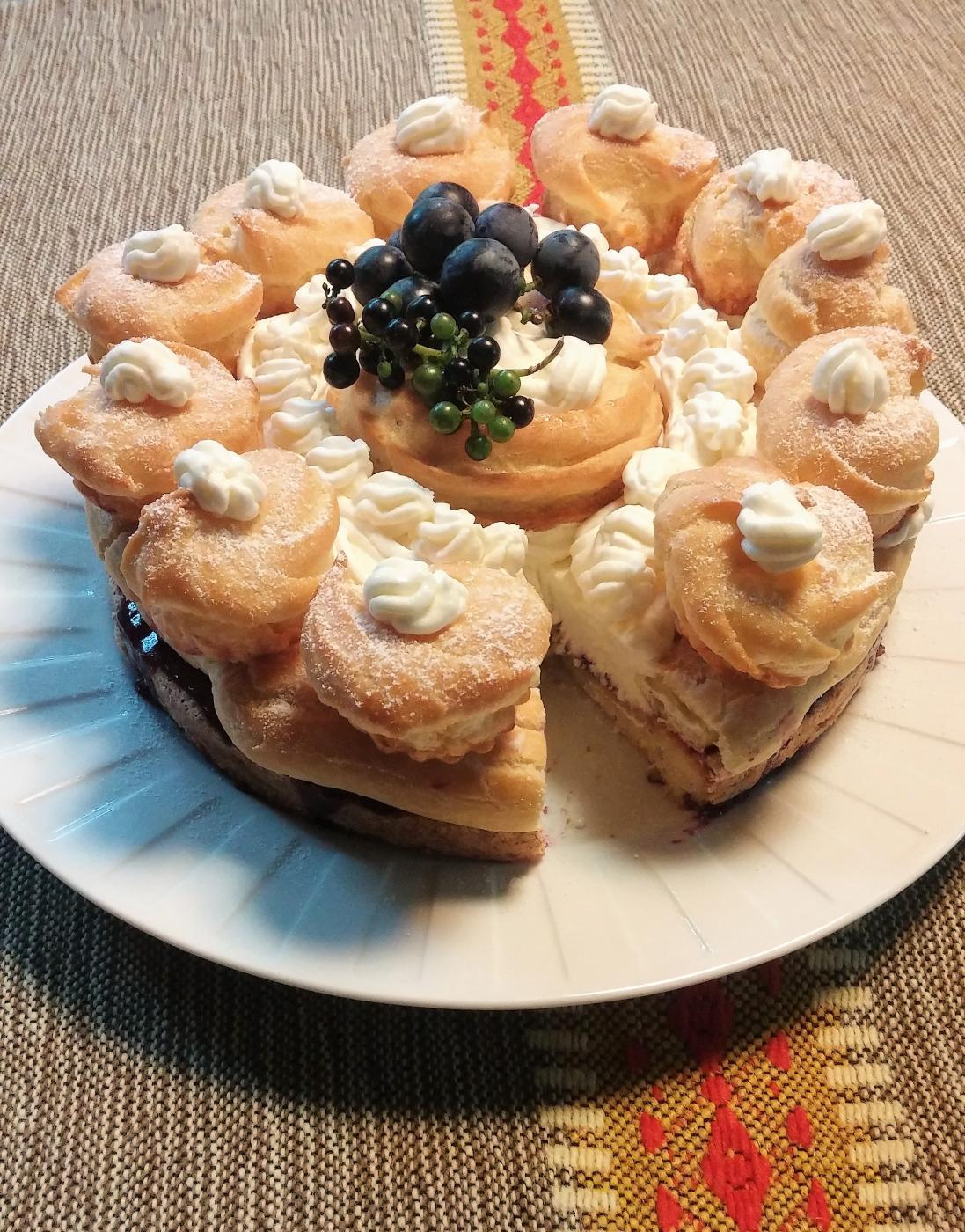 Ça va, mes amis? Here we are in the semifinal week, and as much as Mel, Sue and your humble recapper might like to lighten the mood with French that is, how you say, pas mal, the mood is tense. So let’s get right to it, non?

Our four remaining bakers delved into the precision of French-style patisserie this week. Brendan, Danny, James and John faced their last elimination week before the final with just as much finesse as they have displayed all season.

In the spirit of The Great British Baking Show, The Great Wisconsin Baking Challenge asked participants to select just one of the three Patisserie challenges.

So let’s follow the neither-French-nor-British Chairman Kaga, and allez cuisine! 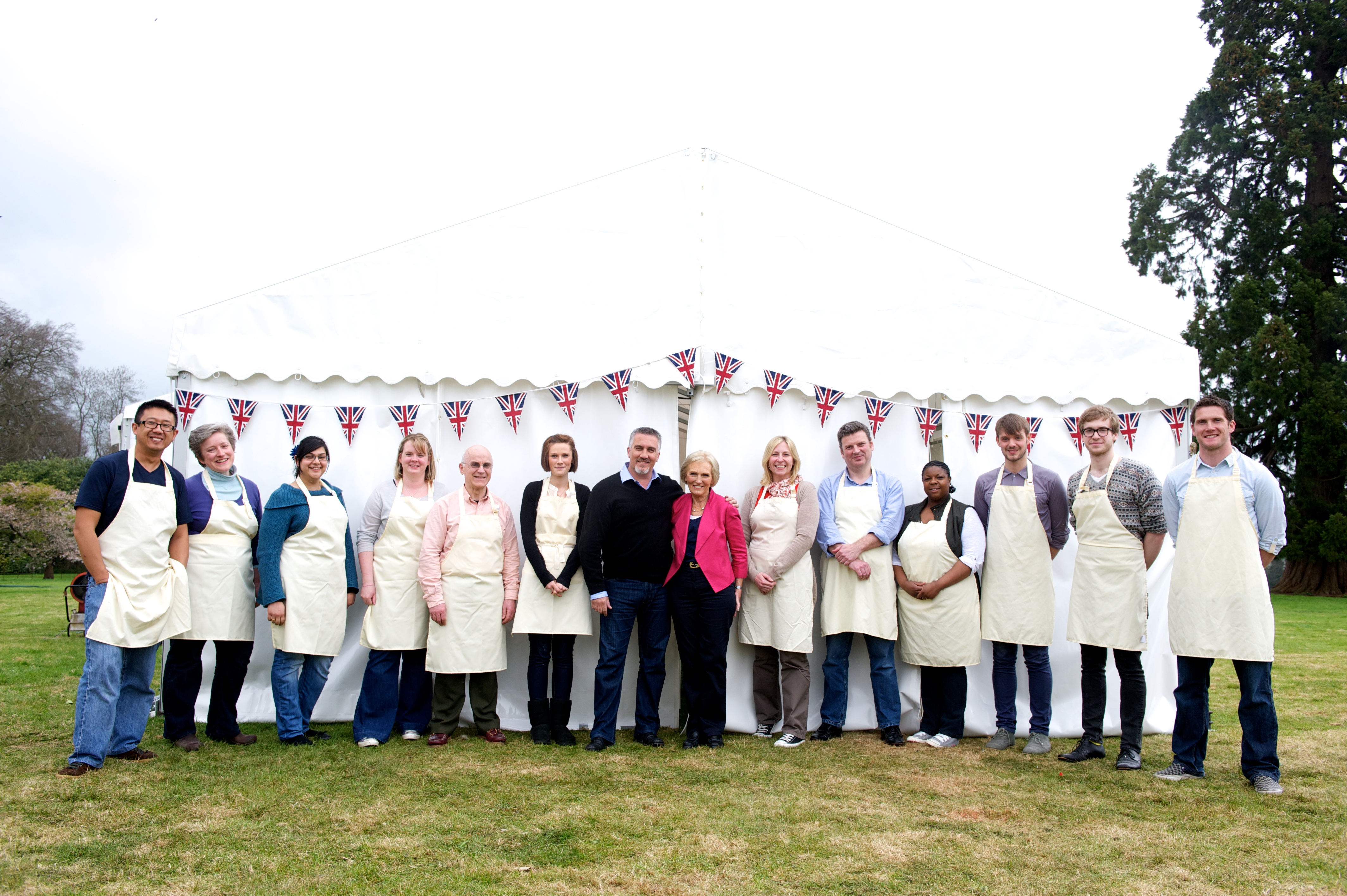 Before we start: If you have not watched this episode yet, SPOILER ALERT!

And don’t forget to read to the bottom to find out who our six featured Wisconsin bakers are!

ON THE TELLY | ROUND 1: Petits fours

The Disaster: I wouldn’t call it a disaster, per se, but at this point in the season it can’t feel good for John to hear that his madeleines look like “a slab on the plate.” Thanks, Mary. Thanks ever so.

Meanwhile, Danny got off to a rough start with Paul: her blackberry and peppermint-flavored macarons didn’t please his tastebuds, and the edges of her orange and white chocolate langues de chat didn’t please his eyes. Sigh.

The Highlights: James got high marks for his combination of chili, lime and raspberry macarons – certainly a risk at this stage of the competition, but one that paid off. 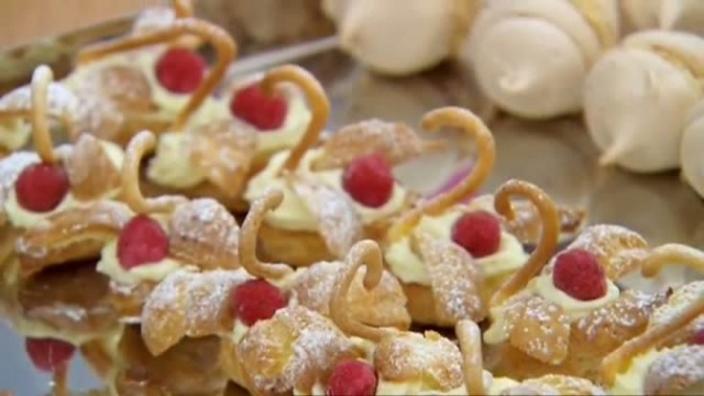 And speaking of our favorite Disco Duck…

The Takeaway: “Absolute uniformity” is what sets Brendan apart, and given that he brought a pizza cutter, ruler AND tape measure to measure his crackers last week, he seems to be living up to this standard. The result: Mary’s “sheer joy.”

While we saw wonderful variety this week, with fondant fancies and macarons galore, one element gave many entrants difficulty: the fondant glaze. Some found it too sticky. Others, like Joni from Manitowoc, discovered that fondant doesn’t stick to cheesecake. Oops.

Joni, one of our more adventurous bakers in both flavor and effort, attempted all three challenges this week, each with a little something extra. Here’s her petit fours submissions alone: chocolate and coffee Fondant Fancies, matcha-almond genoise with strawberry balsamic and pepper preserves, and rhubarb cheesecake with lemon fondant. YUM.

“The matcha green tea with strawberry-balsamic-black pepper jam petit four was made to highlight Manitowoc’s sister city of Kamogawa, Japan,” she says. 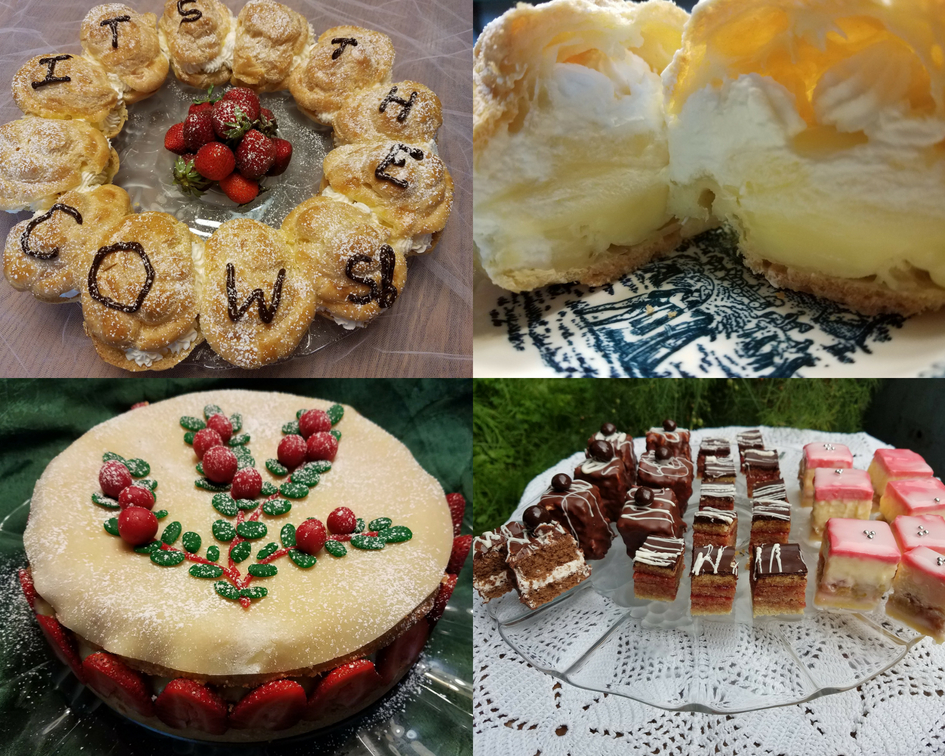 Michaleen, from Portage, looked to the Dane County Farmers Market for inspiration, including “honey for the honey man (you know, the guy with the hat!) . . . . and Queen Anne’s lace jam for that one jam stand with the EXTENSIVE collection of strange jams and jellies.” Others include mini dark chocolate zucchini cupcakes with cinnamon cream cheese buttercream and vanilla macarons filled with lavender, honey, white chocolate ganache and topped with candied lavender.

Even though she rocked it, “I’m never making macarons again unless someone pays me,” she says. “Happy with it? After, like, the third batch.”

Fair enough – but the results look like they were worth it to us! 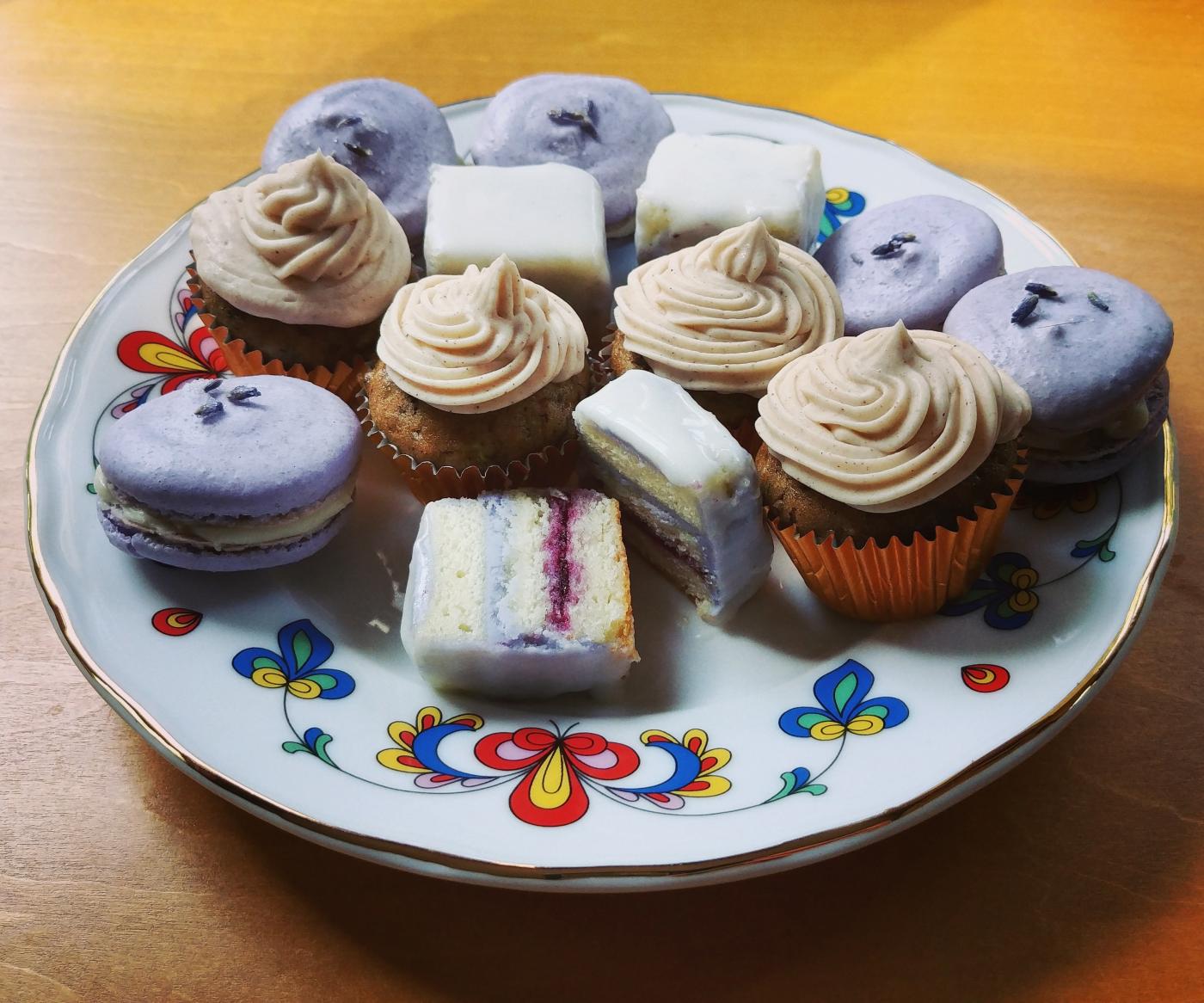 ON THE TELLY | ROUND 2: Fraisier cake

For the Technical, a delectable Fraisier cake (no, not the guy from Cheers) unites layers of genoise sponge cake with strawberries and crème pâtissière (or “crème pat,” for those of us in the know…). It’s finished off with chocolate and a glistening layer of marzipan on top.

The Disaster: Schloooop! The filling must hold its shape, or else the too-warm crème pat will slide away like an exploding above-ground pool. And, indeed, that’s what happened to Danny.

The Highlight: James may have considered this the hardest technical yet, but it sure didn’t show; the judges ranked him first, followed by John, Brendan and everyone’s favorite pastry volcanologist Danny.

The Takeaway: One mistake is all it takes. John came out a bit worse for wear after the Signature, but a (literally) solid round has him back in the hunt, while Danny fades.

You can’t get much prettier than the Summer Delight cake made by Madelyn, from Plymouth. Her secret? “Wisconsin whole milk, butter, eggs and 100% Wisconsin love ❤” She and her family are fans of the European-style recipes because they’re not as sweet, and she knows they’ll make some of these bakes again. 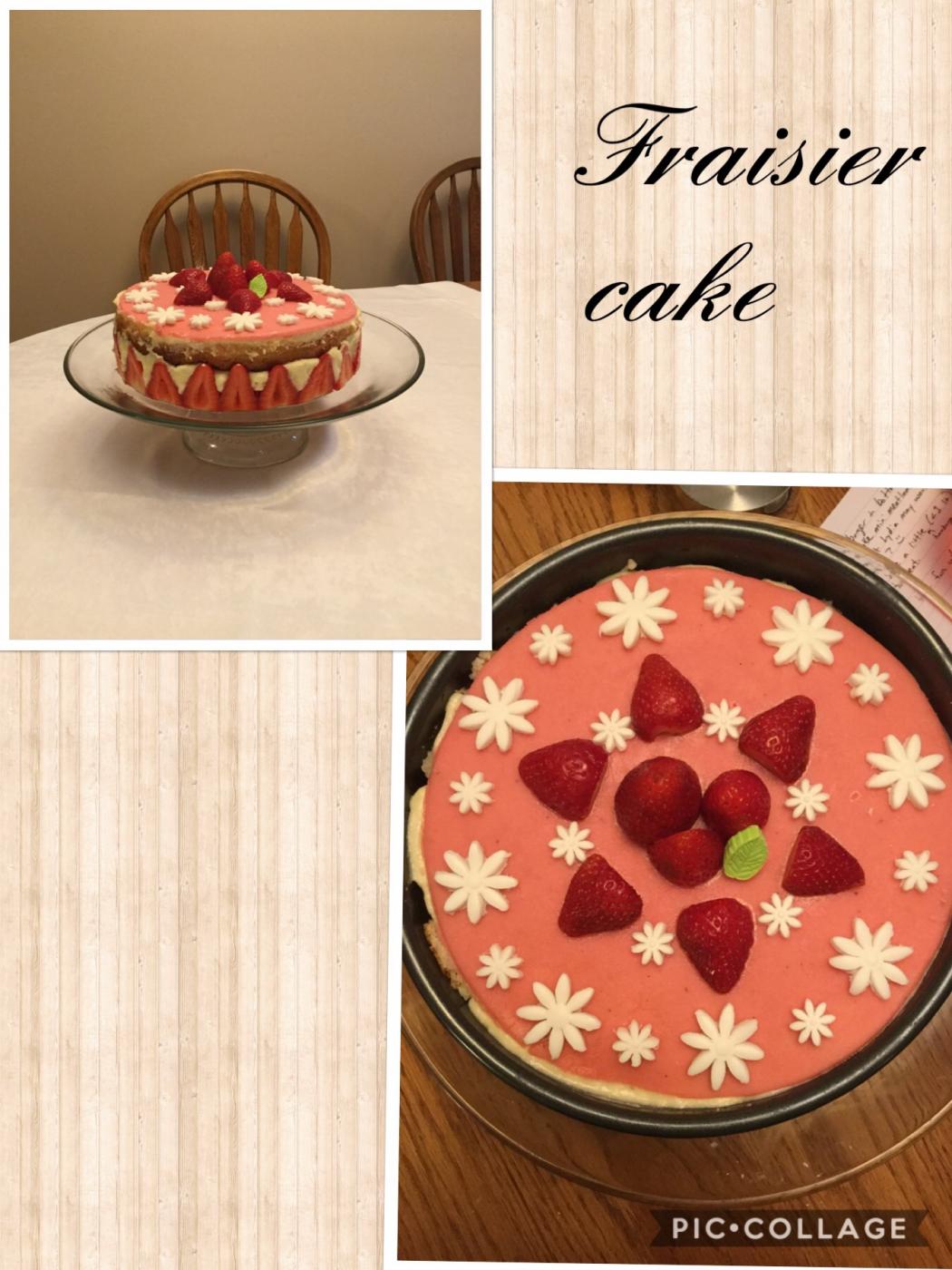 Alas, not everyone found beauty in their bakes. Laura, from Madison, pronounced hers “the worst thing I’ve ever baked.” Now she knows: hand beating isn’t enough to make the eggs get fluffy enough for the sponge. She and her roommates ate the strawberries off the sides and sent the rest straight to the garbage. As for the ingredients, “I used Wisconsin butter and eggs. What a waste.” 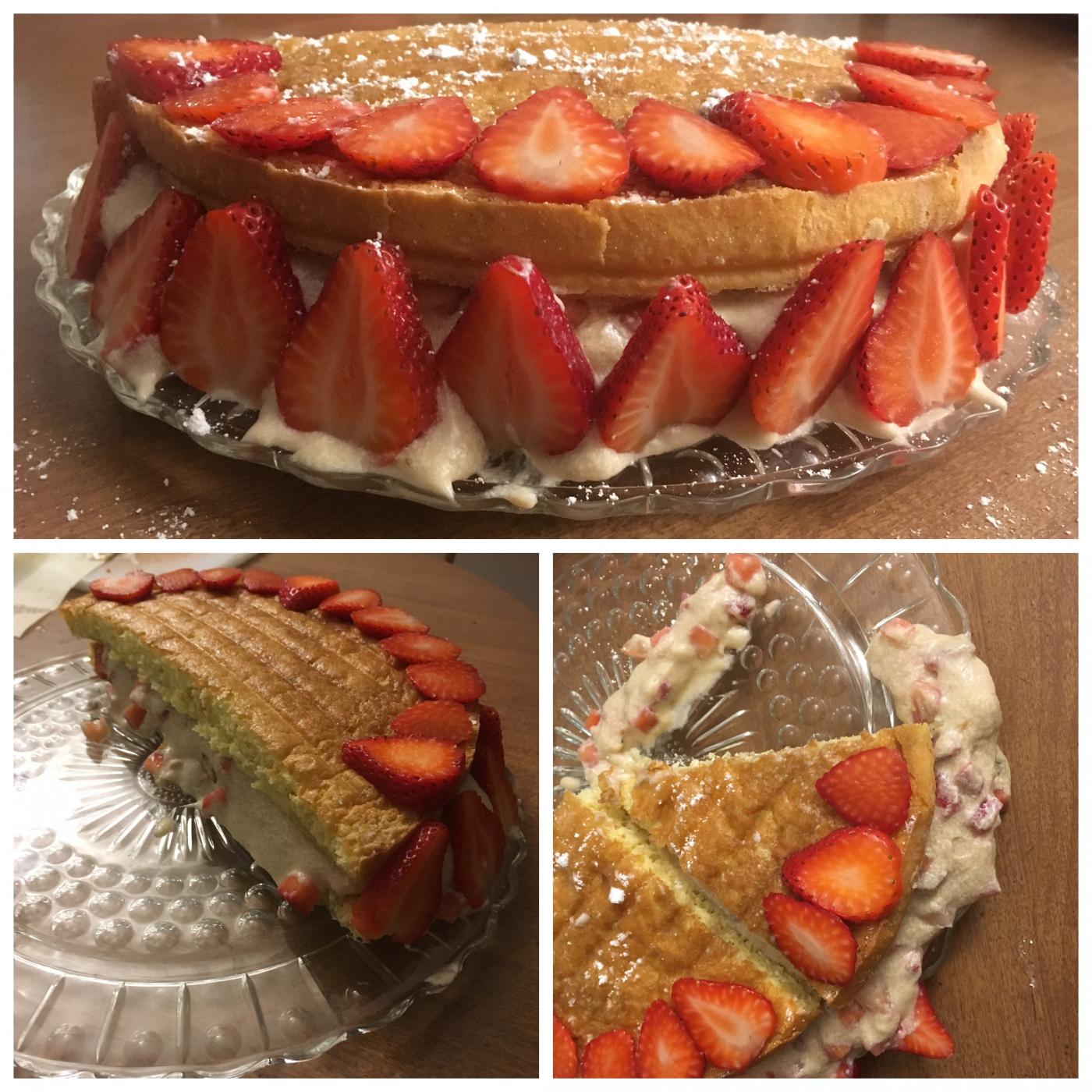 ON THE TELLY | ROUND 3: Choux pastry gateau

The Disaster: Oh, Danny Girl… the bake worked, but the flavors did not. Lychee, raspberry and rosewater proved a bit much all together, thus sealing her fate.

The Highlight: John’s Gateau St. Honoré was pretty, professional and passionfruity. Ooh, la la! (Brendan, ever the traditionalist, considered it “an impertinence to try to tinker with something that’s so well established,” but then he added some kirsch to his own, so there.)

The Takeaway: James was the only one of the four to choose a Paris-Brest rather than a Gateau St. Honoré, and he knew he’d have to step up the difficulty. So he shaped it not like a bicycle wheel but a bicycle itself, combining the flavors of coffee, caramel and hazelnut for a winning combination.

Wisconsin knows its cream puffs! Here are some of the creative ways the participants showed off their pastry prowess.

Sarah went all out and tried two kinds of choux pastry: one shaped into Brendan-esque swans, and one as a classic croquembouche. “Texture of caramelized sugar on a day with 100% humidity ain’t great (to say the least),” she reports. 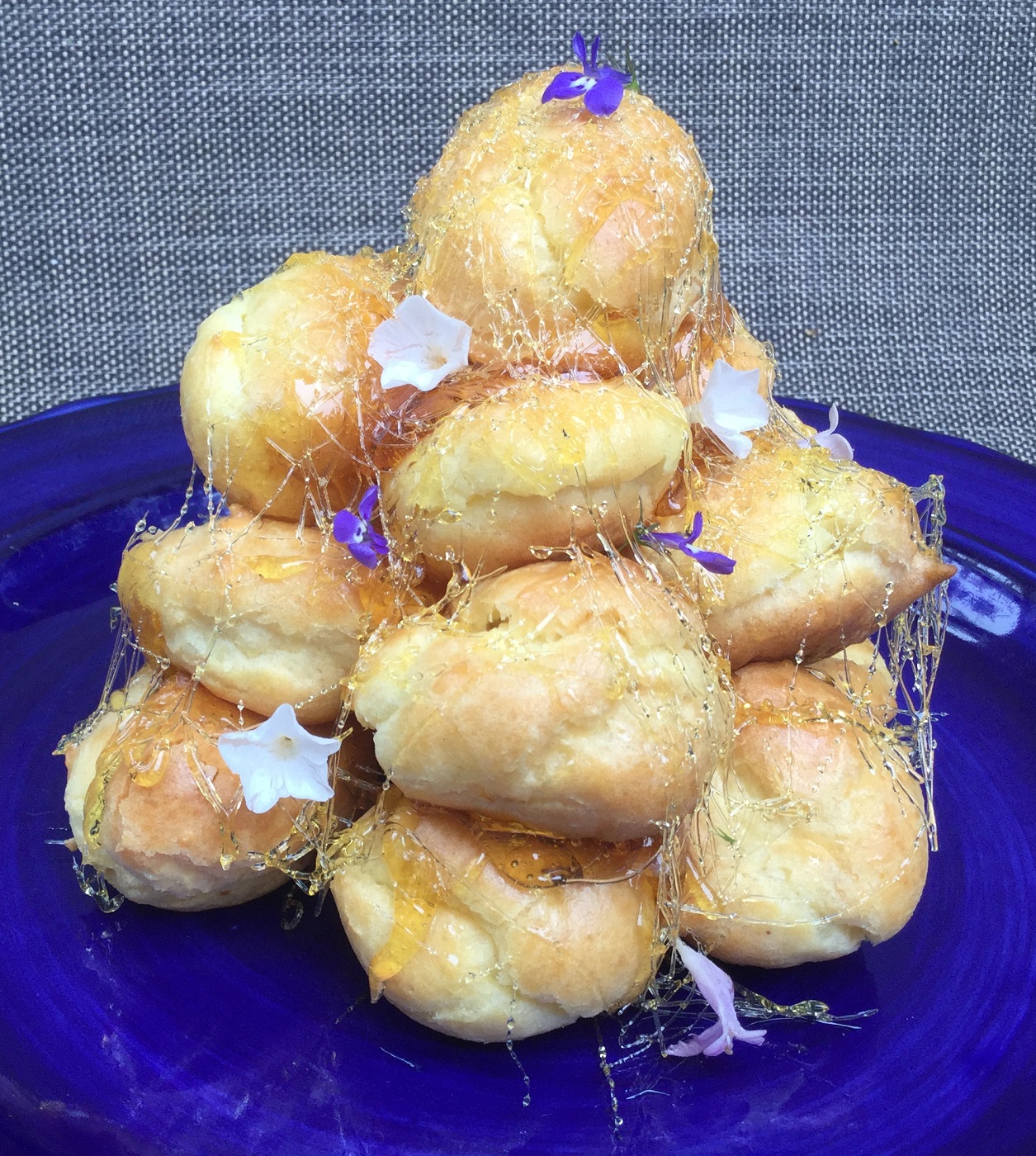 Maureen, from Arkdale, had a hard time not oversampling her Gateau St. Honore (and she hopes St. Honore, the patron saint of bakers, didn’t hear her expletives in the kitchen…). She notes that the pastry was very pretty but really seemed to be present merely to give the rest of the gateau its form. And what a form it is, especially with the salted caramel colored Badger red! 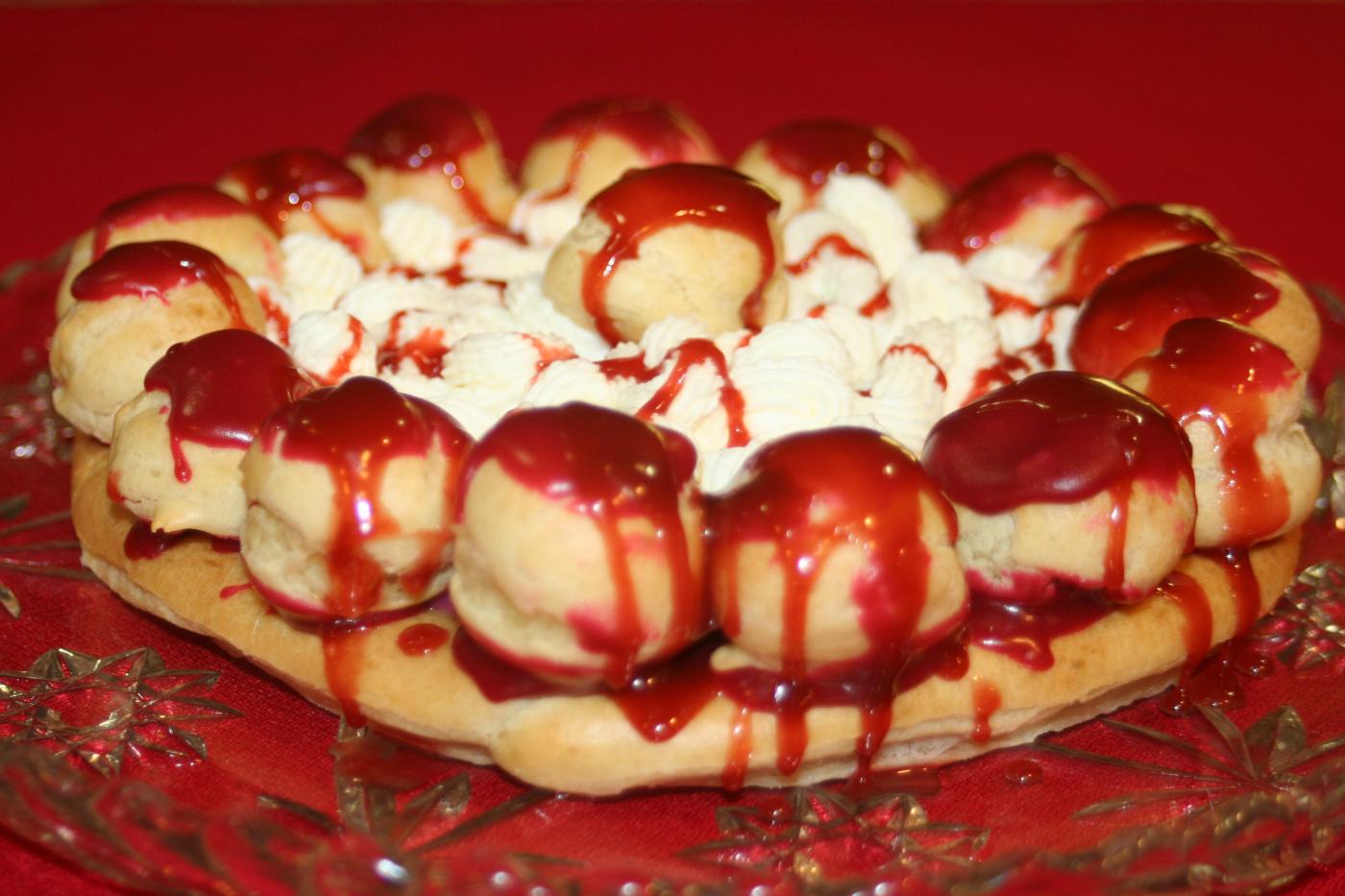 Star Baker: That “wily minx” James wheeled his way to the top, despite cheekily admitting that he’s been “winging it.” If that’s winging it, I can’t wait to see him BRINGING IT.

Kicked Out of the Tent: As sad as we were to see Danny leave, she bowed out with grace and class, saying that she’d enjoyed the way the experience had pushed her to learn new skills, but the best part was discovering how much people in her life valued her.

Ainsley and Cammy, from Sun Prairie

These two really made the most of their three recipes, improvising with off-sized cake pans and turning the leftovers into cake pops. Best of all, they created their madeleines in homage to their favorite treats from Starbucks (although we’re sure this bake is much tastier) and named them after Bucky Badger’s onetime lady love, Becky. 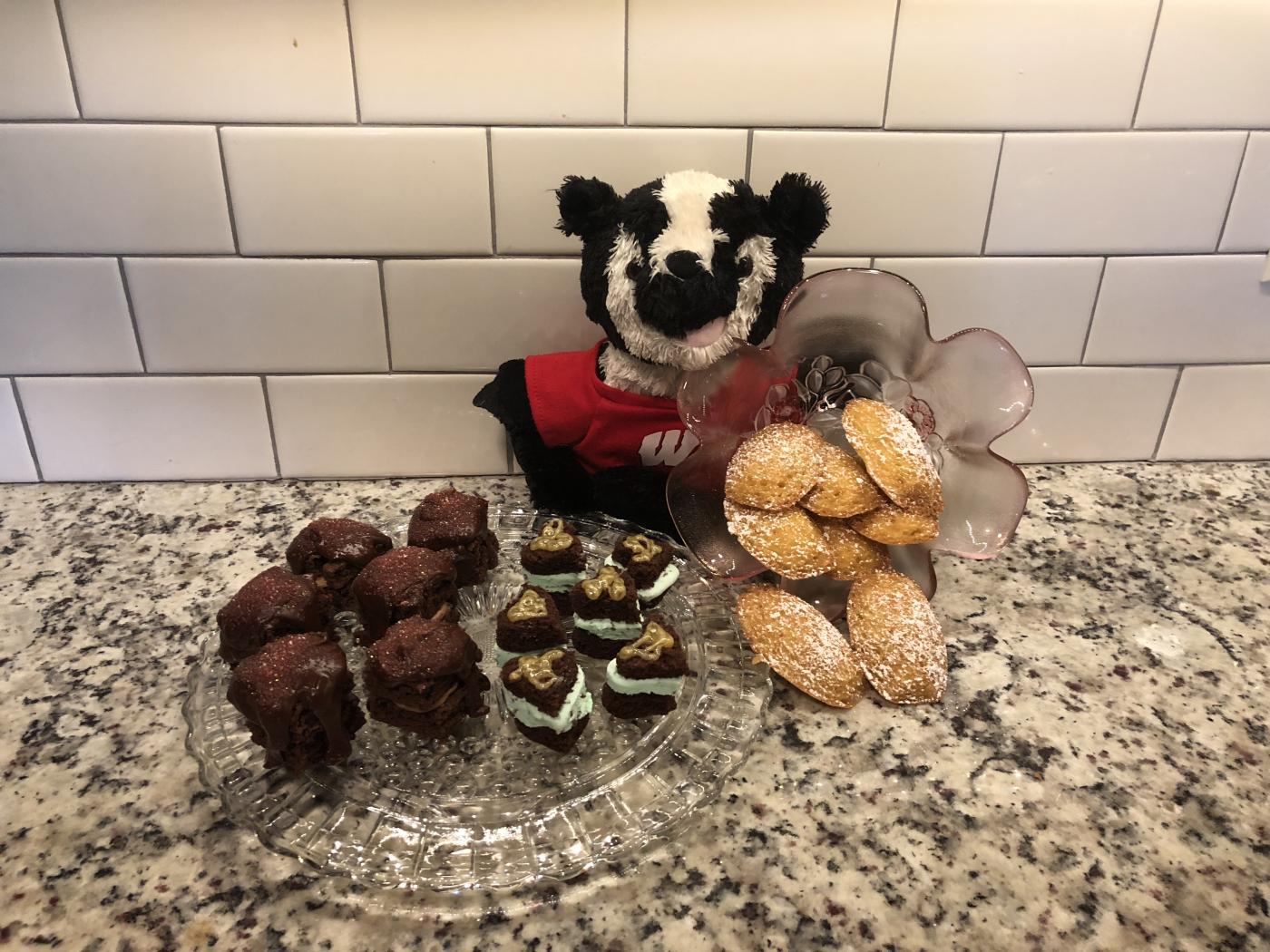 Since moving to Western Wisconsin 14 years ago from urban New Jersey, Sandra says she’s picked up some of the best traits from her new friends and neighbors. “They are generous with their time and baked goods!” So her picture-perfect Strawberry Fields Fraisier Gateau is getting shared with her best Wisconsin friend and visiting family. The key to Sandra’s success: following Mary Berry’s tip and reading the recipe more than once. (Five times should be enough.) 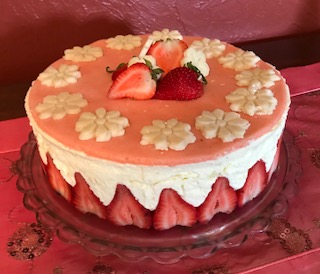 Even in Week 9, we’re still attracting new bakers! Linda’s RazzFraiz Cake honors the 81-year friendship between her mom and her best friend. Every year they’ve visited Door County’s Von Stiehl Winery together, so Linda put a twist on the recipe by adding the winery’s Raspberry Framboise liqueur instead of kirsch. 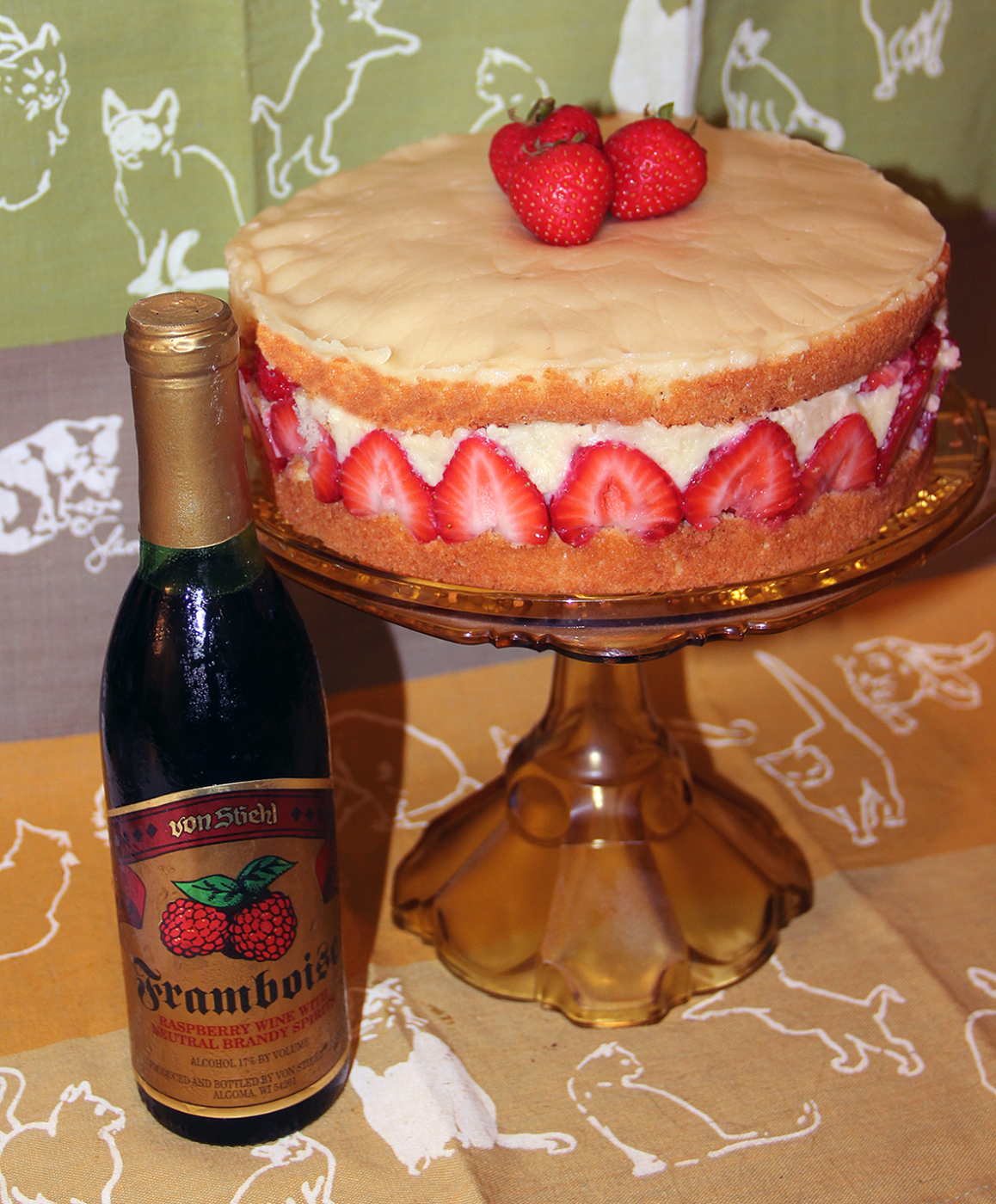 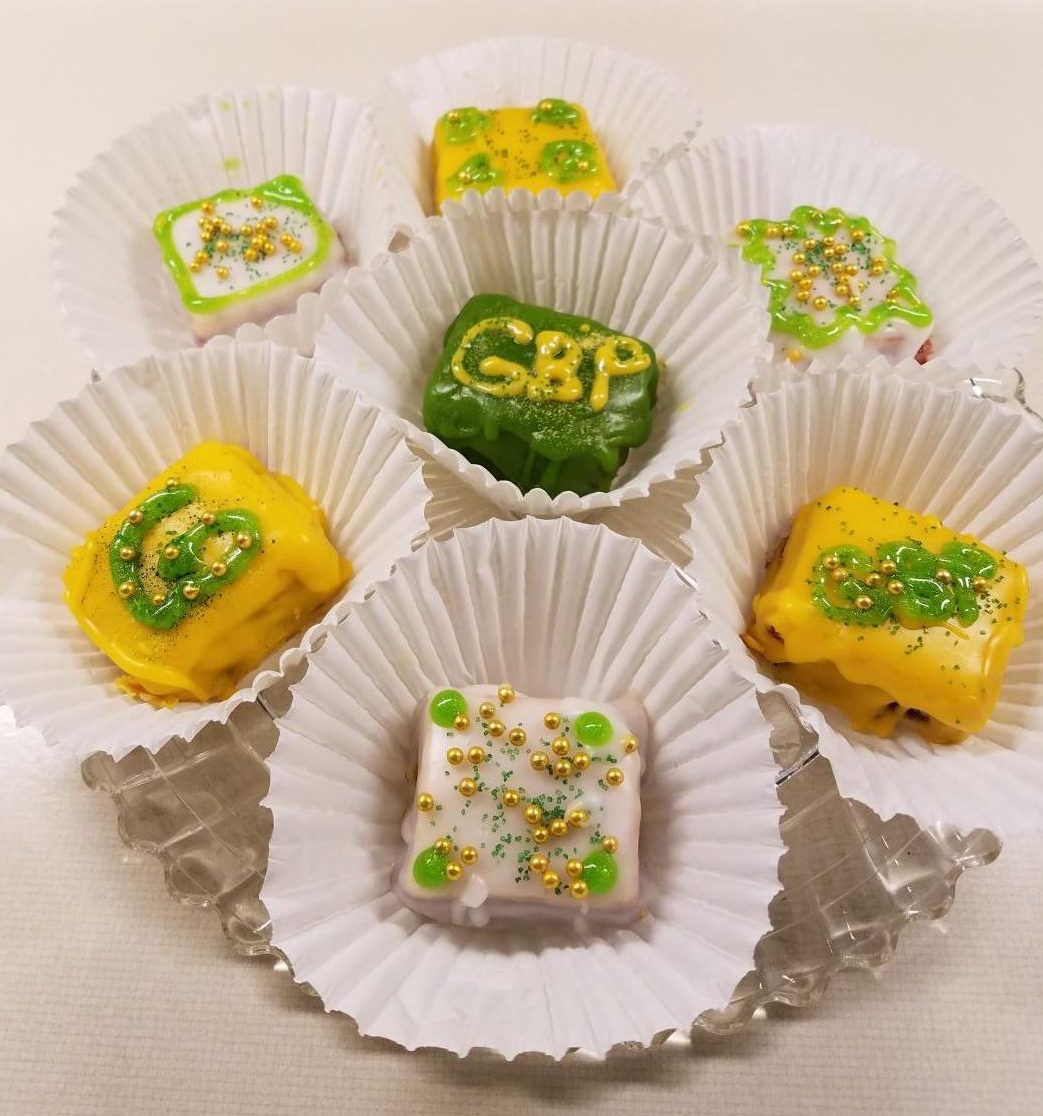 Lydia named her choux creations Appley Goodness, and we won’t argue. She cooked some apples and cinnamon down and mixed them with vanilla pudding before piping into her choux shells… mmm. “I might add some caramel this fall,” she says, and we kind of hope she’ll send us a few when she does. 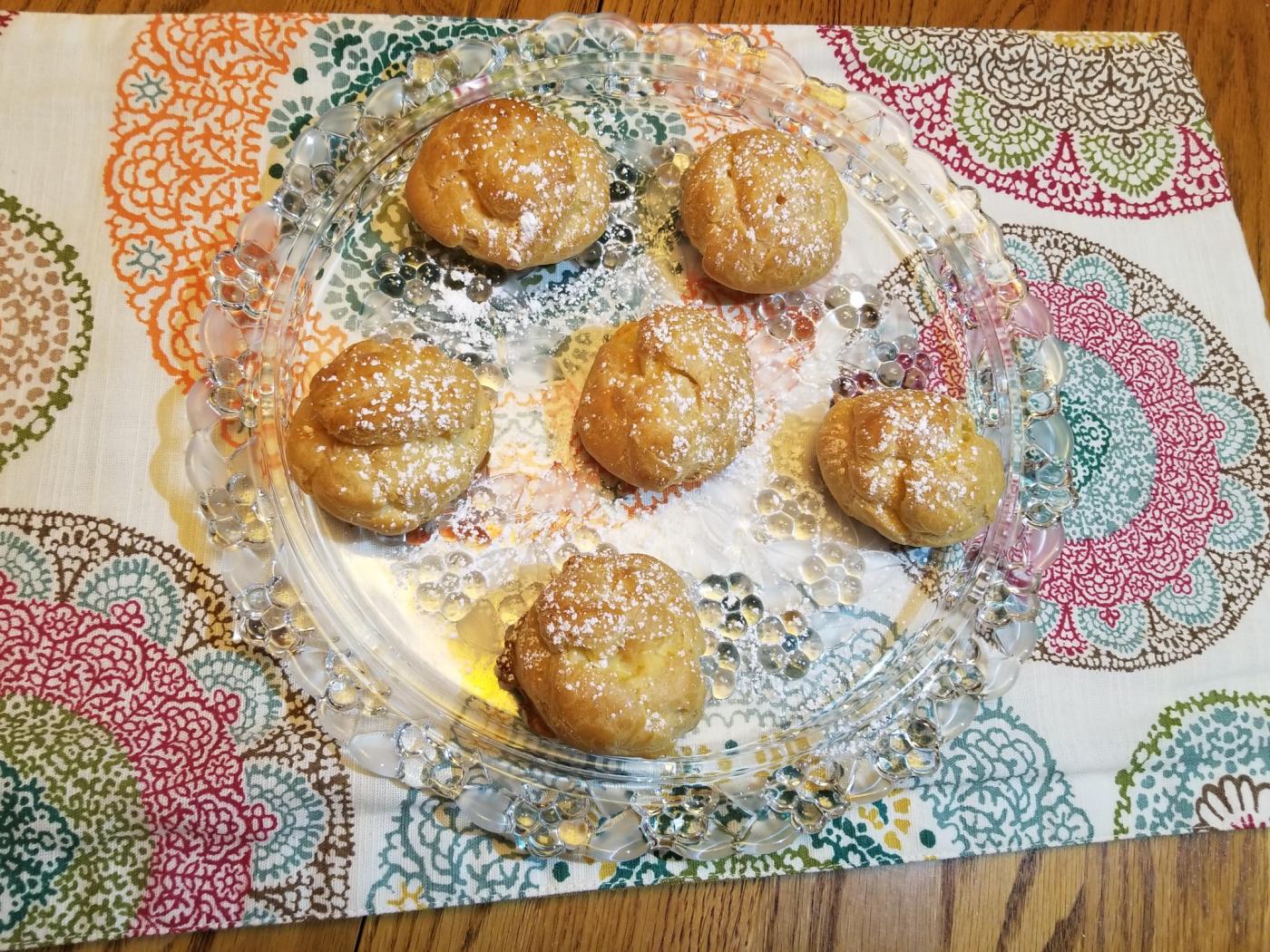 Betty’s Grape Gateau St. Honore drew on childhood memories of a special cream puff made by her mother once a year for her parents’ anniversary. Betty filled it with grape jelly made from local grapes. “Making [cream puffs] for this gateau was a first for me, inspired by this Wisconsin ‘cooking school’ of challenges. I have learned so much this summer!”

Next week: this is it! The contestants face their final challenge in the tent, and our bakers must come up with the most Wisconsin-y bakes of their lives. On your marks, get set. . . bake! If you need inspiration, you can watch the final episode of The Great British Baking Show online now.