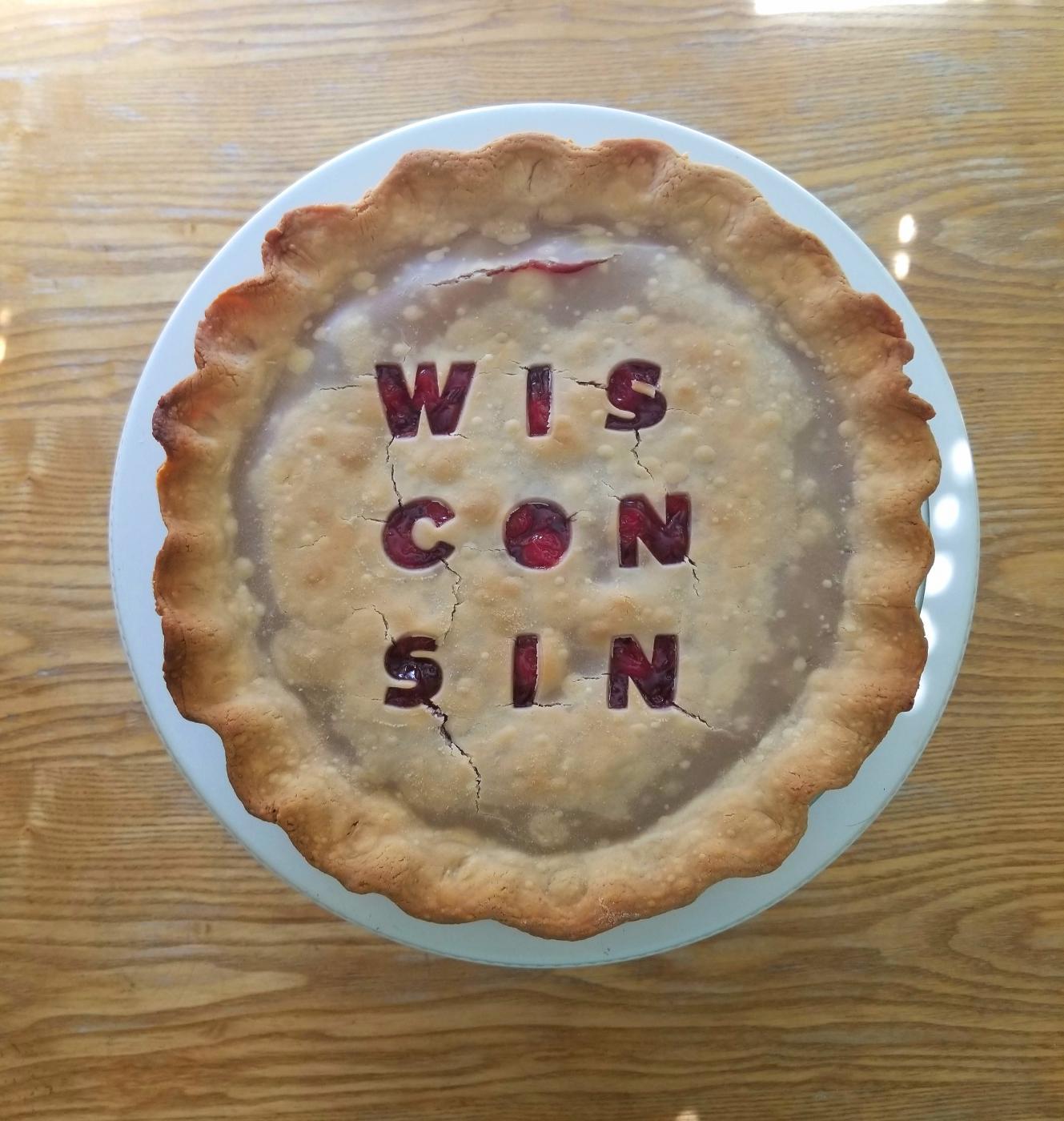 All eyes were on PIES this week in Paul and Mary’s tent, and our glorious Wisconsin bakers came through with over 80 heavyweight Wellingtons, American Sweets and some hair-raising Hand-Raising to rival them all. A quote from one of our bakers sums up Pie Week to perfection: “. . . butter, butter and more butter . . . and lard!”

In the spirit of The Great British Baking Show, The Great Wisconsin Baking Challenge asked participants to select just one of the three pie challenges. Fearless with flour, several bakers tackled puff pastry and elaborate latticework for the first time. They also learned the best way to protect a Wellington’s fragile crust from meat’s overzealous juices: just wrap it in . . . more meat! #MeatWrappedMeat!

Before we get s(tart)ed: If you have not watched this episode yet, SPOILER ALERT!

And don’t forget to read to the bottom to find out who our six featured Wisconsin bakers are!

The Signature bake on this week’s episode challenged contestants to a Wellington, a nod to the English medieval “pye” made of meat and savory spices, then wrapped in pastry crust to maintain moisture. A good Wellington hinges on the pastry itself: it has to rise in layers and flakes as it contends with aggressive liquid produced by the meat & veg inside.

The Disaster: Our hearts went out to Sarah-Jane as we watched her Wellington weaken in the oven and spill out to disaster. Though her recipe – a traditional Beef Wellington with Ham and Gorgonzola Cheese – sounded stupendous, she chose not to chill her pastry dough. Consequently, the gobs of pounded butter swiftly melted in the oven leading to calamitous collapse!

The Highlights:  Cathryn delighted with a traditional Full English Breakfast. . . in Wellington form! Her sausage, eggs, tomatoes, mushrooms and black pudding were wrapped in parma ham -#MeatWrappedMeat! – creating a massive sausage roll that Mary and Paul adored for its flake, flavor and family-style departure from the other bakes.

The Takeaway: How does a librarian make puff pastry? With a “book turn,” of course. Once your pastry is rolled out, folding it like a book – instead of a simple double-turn – creates added layers and extra puff!

HOW OUR LOCAL BAKERS DID | WELLINGTON:

We’re so proud of all the attempts Wisconsin bakers made to win us over with Wellington. Kandy from Edgerton submitted a stunning traditional bake which includes a snapshot of her fabulous double fold!

Annette of the now-legendary duo, Annette & Vernette, slipped salmon in her Wellington for a savory surprise. Wausau’s Nicole honored the Rhinelander Hodag in puff pastry over turkey. And Kara from Oregon submitted a Wellington Sausage Trio. Which sausage sings harmony, Kara?!

For the Technical, contestants played their hand #punster at a lost art. To “hand-raise” a pie one must use a “pie dolly.” Instead of pressing the pastry into a tin, the baker builds the crust upward and shapes it around a small wooden cylinder. The thickness of the dough becomes crucial: too thin and it will crack to seeping disaster; too thick, it will undercook. Add to this challenge a hot water crust and clearly defined layers of filling – and no instructions – and the tent was filled with frustration!

The Disaster: In the blind judge, Ryan came in last. His pie fell flat – literally – resembling more a packed Cornish pasty than a tall and proud hand-raised pie.

The Highlight: Cathryn received first place, her pie the best representation of proper hand-raising while still plagued with a lack of jelly – did it go rogue?! – like many of the others.

The Takeaway: Hand-Raised pies are hard, y’all! With unfamiliar instruments and zero instruction, we think this was a bit of a sucker punch to our striving British baker bellies!

HOW OUR LOCAL BAKERS DID | HAND-RAISED PIE:

Wisconsinites put embattled Brits to shame this week in the Technical. Those in the tent had a heck of a time with Hand-Raising, but our bakers took to it with dogged dedication. Alison from Eau Claire nailed it with chicken and thyme!

Our Busy Bee Bakers delivered Octoberfest in July (!) with autumn harvest flavors including pork, potatoes, red cabbage, sauerkraut and apples. Bratwurst seasoning from Blanchardville had a hand in the hand-raising.

Maureen from Arkdale looked ahead to Thanksgiving and delivered three types of hand-raised pies. Mac n’ cheese anyone? She used beef from local Henthorne Herefords.

Beloit’s Alice shares a monogram with Wisconsin and offered Cornish hand-raised pies to celebrate Wisconsin’s immigrant history. . .  and her surname!

And because we’re in urgent need of some veggies at this point in the blog recap, we highlight Sandra’s “Star of India” pie and Rebecca’s “Rabbit Food” layered pie. Now our tummies feel better.

American Pie as understood in Britain is sweet, sized for a family and lidless. It includes a “sweet crust” base: a shortcrust pastry enriched with sugar. This challenge rests on the beauty of the cut – every slice should be a showstopper: stunning to gaze upon with firm consistency. Paul and Mary challenged the bakers to approach “sweet” with caution, hoping for something subtle and not too cloying.

The Highlight: All other sins – sizable this week – were forgiven for Ryan when he delivered a Key Lime & Ginger pie that Mary and Paul deemed “sheer perfection.” Holy moly, Ryan, that’s high praise!

The Disaster: Oy. Manisha. Her Banana Scotch Meringue had nothing to bind it together and, upon cutting, fell onto the plate in an unwieldy, lava-like flow of flotsam.

The Takeaway: A few bad choices made in haste can lead to a Sweet American Pie with flimsy architecture and funky flavor.

HOW OUR LOCAL BAKERS DID | SWEET AMERICAN PIE:

So many American Pies to dazzle the eyes this week, many notable for their clever cut-outs like Alaina’s “Queen Cherry Pie” below.

Team Shlimder’s “Cherry Night Owl” pie sure is a hoot, inspired by a sage (left out of the pie) owl who holds a summer perch in Quarry Park in Madison.

Mitchell from Madison baked a hearty cran-apple while camping with family in Wyalusing State Park and proves it with a puff pastry campfire scene. And Lara & Tom’s “Birds Love Blueberries” pie winks at their ongoing competition with the birds for the blueberry harvest as well as this past weekend’s Blueberry Fest in Gibbsville near Sheboygan!

Star Baker: Ryan! In an unexpected twist of (key) lime, Ryan delivered a perfect pie enough to overcome his harrowing hand-raising and win!

Kicked Out of the Tent: Manisha – Her poor pie didn’t hold, nor did her standing in the bake-off. Manisha’s worry about disappointing her family brought us to tears, but she left us inspired with her parting confidence about what she learned: “I can *do* things, even if I mess them up, I can do them!” Yes you *can,* Manisha!

Joshua from De Pere, WI
The only thing the Great Wisconsin Baking Challenge editors love more than sweets is 6th birthdays! (Dinosaurs aren’t half-bad either.) Joshua’s son celebrated 6 in Sauropod-ous style last week with his father’s ravishing Raspberry Ribbon and Baked Raspberry pies. A big birthday “Roarrrrr” with love from all of us at WPT!

Jean from Madison, WI
Jean’s “Wisconsinized,” mouthwatering Mushroom and Blue Cheese Wellington marveled us. While we take pride in our official state motto adopted in 1851, “Forward,” we never imagined it so beautiful and delicious . . . and inscribed in puff pastry! Bravo, Jean. Can you do the same with the Biennial Budget?

Kim from Shiocton, WI
Kim joined us from Shiocton in Outagamie County this week to deliver the essence of “Summer in Door County” in a gorgeous and singular cherry pie. Her latticework dons a hummingbird feeding from a Wood Violet, our Wisconsin State Flower.

Julia from New Glarus, WI
At Wisconsin Public Media we love a good pun. We love even the hint of a good pun. So, it’s no surprise that Julia’s “Beet Wellington” stole our hearts . . . and offered a full puff of veggies to please those among our WPT friends who don’t eat meat. Thanks, Julia!

Kevin from Viroqua, WI
What would a Wisconsin-born Welly look like, you ask? We turn to Kevin from Viroqua for our answer. Brats + cheese curds + puff pastry create a celebrity toe-to-toe with the traditional British beef!

Speaking of puns, quit pudding off your prep for next week’s challenge! On your marks, get set. . . bake! If you need inspiration, you can watch the upcoming episode of The Great British Baking Show online now.