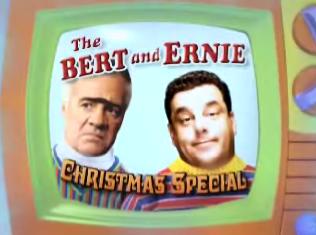 I am proud to say – like so many of us – that I grew up a devoted Sesame Street kid. I’m also one of the biggest Sopranos fans that I know.

So, there might not be a better Christmas gift than this video that arrived online from our friends at Sesame Workshop via the 2007 Elmo’s Christmas Countdown special. Seems like our old friends Ernie and Bert have decided to produce their very own Christmas special and they didn’t feel that they were the right pair to play themselves.

In a brilliant casting turn, they tapped Sopranos stars Tony Sirico and Steve Schirripa (Paulie Walnuts and Bobby Bacala, respectively) to play their roles. The outcome – hilarious. The scowl on Sirico’s face while he’s wearing classic Bert eyebrows is worth the price of admission alone. And his Bert laugh? Too much!