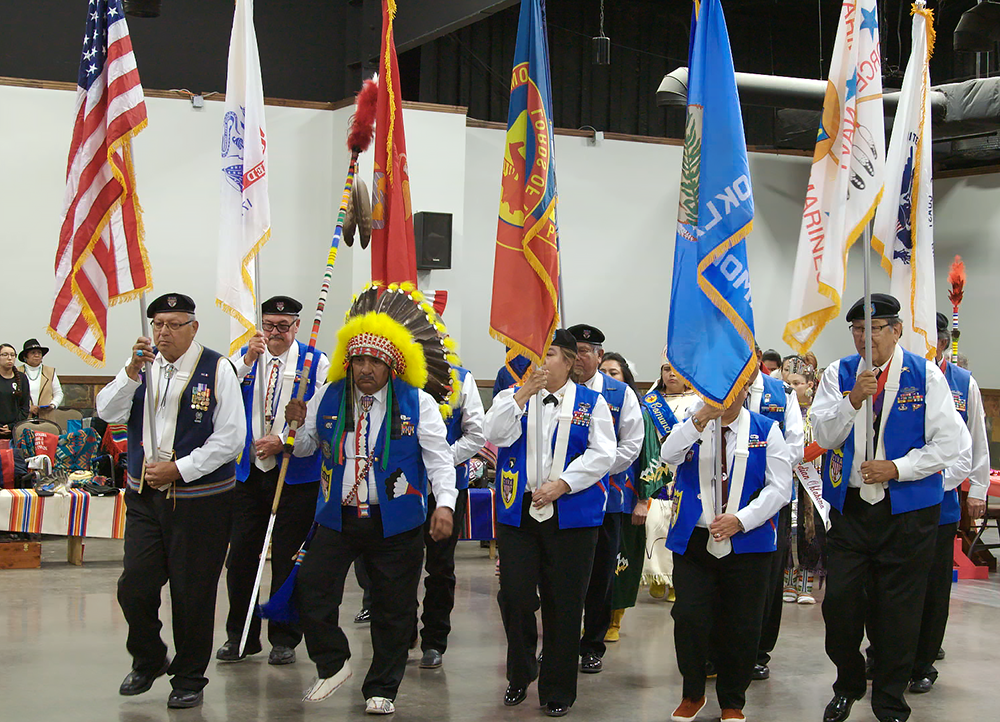 “It’s such a prominent reality in all our communities,” she says. “I don’t think I know anyone who doesn’t have a veteran in their close circle of friends and family.”

Now a professor of journalism at Northwestern University, Loew revisits these themes as a consultant on the new documentary The Warrior Tradition. The film airs 8 p.m. Monday, Nov. 11 in honor of both Native American Heritage Month and Veterans Day.

Read on for more about the Native American presence in American military service, along with Loew’s own reflections on this project.

Apache Scouts pose at Fort Apache, circa 1884. The man seated in the center is “Cut-Mouth,” the first sergeant of Company A.

Since the 1700s, Indigenous warriors have served in American military units at a much higher rate than that of the general population. Loew’s own family has served in wars since at least the 1700s, when an ancestor fought as a cavalry scout with French General Montcalm on the Plains of Abraham in the Seven Years’ War [aka the French and Indian War].

“During Desert Storm in the 1990s, I recall seeing that, outside of counties with military bases, Menominee County [with the Menominee Reservation in northern Wisconsin] had the highest level of military service in the country.” says Loew.

While Way of the Warrior dealt with those who served through the Vietnam War era, The Warrior Tradition broadens the scope, adding personal voices of those who have served up to the present day in places such as Iraq and Afghanistan.

Indigenous women have also served just as proudly, and have a prominent role in this film. (Watch an excerpt about women warriors here.)

“Indian scout syndrome” has often led white commanders to assume that Native Americans were considered better warriors. In World War I officer reports that Loew reviewed, Native Americans came across as bloodthirsty fighters, willing to jump out of airplanes behind enemy lines. Officers felt safer if they had a Native American in their unit; “they knew what they were doing,” says Loew.

Natives themselves have also assumed a mantle of toughness, putting themselves in harm’s way with disproportionate representation in the Green Berets, Navy SEALs and airborne divisions.

“One man might say, ‘Oh, yeah, I volunteered, because I’m Indian,'” Loew recounted. “I said, ‘Wait; didn’t you say that you grew up in a housing project in Philadelphia? You never touched anything until you got to boot camp.’”

Back home, veterans are at the forefront of tribal life: leading powwows, serving in tribal politics.

Elizabeth Perez (North Fork Rancheria of Mono Indians) was an aviation logistics specialist for the U.S. Navy from 1997 to 2005. She is now the Deputy Secretary for Minority Veterans at the California Department of Veterans Affairs.

“People in native communities have always been able to separate the warriors from the wars,” says Loew. “In the U.S., we can always debate about wars. People who served in Vietnam didn’t get a lot of respect from protesters. Our warriors have always come back to communities that have embraced them, respected them for what they did.”

Community care for military members begins before someone leaves for military training. The community often sends a tangible reminder with the warrior, something they are expected to bring back when they return home safe. In the film, one participant shows an eagle feather that has been carried in overseas conflicts by four generations of his family.

“If you’re carrying a medicine pouch or an eagle feather, you’re intimately reminded that your community loves you and is praying for you,” says Loew. “Eagle feathers are what we pray with.”

After they come home, purification traditions may help them reintegrate into society after trauma. In some Great Lakes and Woodland communities, sweat lodge ceremonies use talk, songs and other rituals to help returned warriors deal with the wounds – physical, emotional and spiritual – sustained overseas.

“Native communities better than many others understand that you don’t want to just bring someone back into the community; you can’t introduce that kind of poison back in,” says Loew. “War has taken a peaceful human being and sharpened their senses so they’re alert to danger. They’re killing machines. We have an obligation to help these people integrate back in.”

Loew hopes mainstream society can learn from this community obligation to care for those who have put their lives on the line – at war and elsewhere.

“We’re having conversations now in Indian Country about what being a warrior means,” she says. “Can we broaden the term to cover first responders, people preserving the language, water keepers and others?”

A particularly powerful segment in the film addresses the difficulty of reconciling personal identity with the idea of seeing other indigenous people as enemies, or with being so far from home for extended periods.

One Navajo code talker shares how he brought a small bag of corn pollen, with the instruction to put it on his tongue when things got really bad.

“One of the non-Indian people asked what it was; he said, ‘My people gave it to me to protect me,'” says Loew. “The guy said, ‘Can I have some?’ So they shared it. People get religion pretty fast in those unimaginable conditions!”

Watching the film, Loew became emotional as a woman described trying to explain “what she was” to Syrians.

“The only way she could get ‘Native American’ through was talking about Geronimo and war whoops,” says Loew. “They said, ‘We thought you all died.'”

In response, Indigenous warriors have found creative ways to preserve and celebrate their cultures, even amidst highly inhospitable conditions.

In the middle of the Iraqi desert, for example, military personnel created a powwow from items on hand. Stretching a hide across a 55-gallon industrial drum, they created a powwow drum. Games of stickball and lacrosse took place under falling shells. Women made regalia and fancy shawls for dancing.

“It was crazy – in a good, beautiful way,” says Loew, noting that even in the middle of the desert, at least a dozen Native people from various tribes and nations were able to gather.

“To me, it shows the persistence of culture: even in a wartime environment, people thought it was important to practice their customs and share them with nonnative people.”

Loew’s initial interest grew out of her family’s own traditions, including a grandfather who served in World War I. She had a powerful experience revisiting the French sites her grandfather wrote about in his journal.

“We ended at Aisne-Marne American Cemetery: rows upon rows upon rows of white crosses and a few Stars of David. Because of my time in Indian Country, I was familiar with so many of these names and their tribal affiliations. Besaw: that’s a Menominee Nation name. Morrisons and Kings.

I knew the descendants of these men. I realized I was maybe the only Native American who had visited this cemetery, where many of them might not have had anyone visit their grave.

I came home with that awareness and empathy. I brought that sentiment with me into this project.”

Twenty-nine Navajo recruits, about to be trained as code talkers, arrive at Fort Wingate in April 1942.