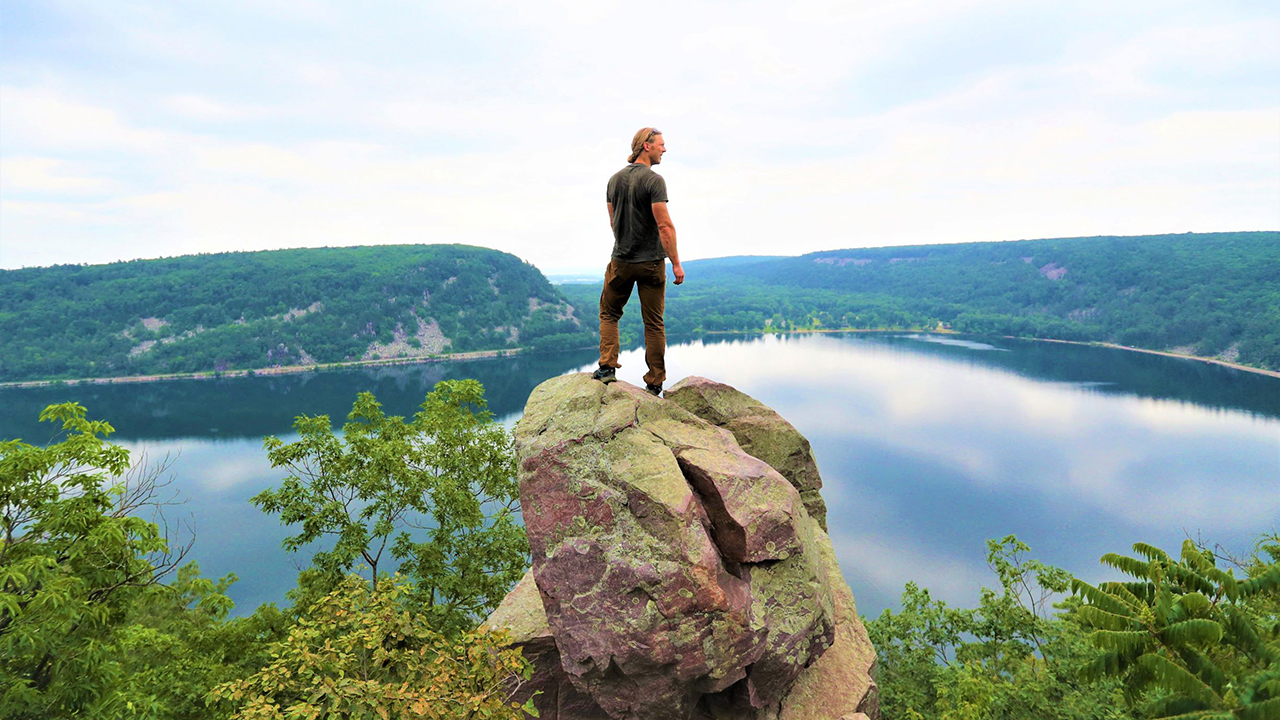 The award-winning team behind the 2013 film Mysteries of the Driftless has again teamed up to crack the geological, biological and archaeological code of North America’s Driftless Region with the new film, Decoding the Driftless.

In this feature-length documentary film premiering 7 p.m. Monday, Aug. 16 on PBS Wisconsin, viewers will take a wild ride through the air, across the landscape, on and under the water, and across time to explore and decipher ancient clues of archaeology, paleontology, geology and biology of the Driftless Region.

In advance of the film’s PBS Wisconsin premiere, we spoke with producer George Howe about the program and the surprises it holds about the Driftless Region.

George Howe: When we had the original idea about making this feature-length film about the Driftless — and it would be the only one ever — we knew we had to raise a lot of money, and we wanted to do more than just make a great, education film. We wanted to do lesson plans, we wanted to do things that would boost tourism — we really wanted to raise the profile. We knew we’d have to have a non-profit to raise money significantly, so we started Sustainable Driftless. The mission is to do environmental and natural resource education, and promote conservation and really change the awareness of residents in a big way because we all know that nothing will ever be conserved or protected for future generations unless people know about it first. Growing up around here, we knew the people involved with starting Sustainable Driftless. We knew the culture well, and we knew that there were a lot of people who lived around here that had no idea there was anything unique or special about this area. If people don’t know what they have, they’re never going to care and it’s not going to be conserved. 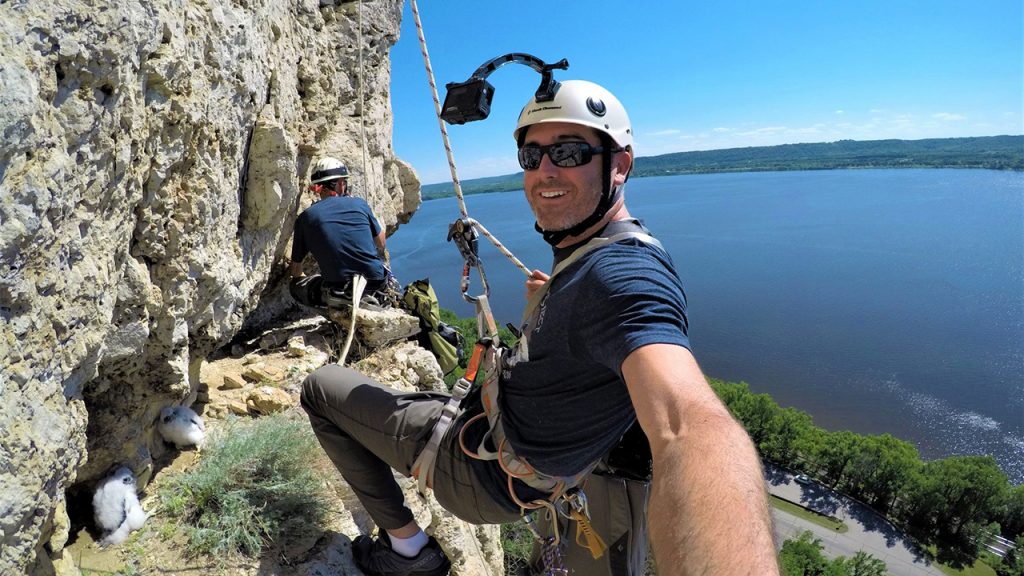 Howe: In Mysteries of the Driftless, we pointed out a lot of stuff, but we didn’t explain it all, and we didn’t have time to explain it very deeply. With this film, it explains everything so it’s like a mystery that’s decoded or solved. We really went deeper. We went back a half a billion years and showed: How did we get the geology that we have? What processes formed the layers of the soils? The topography? We did it in a fun way.

PBS Wisconsin: What are some things the audience will learn about the Driftless?

Howe: We deeply explain things – how water carved everything out. Once you know the geology, you can better understand why we have sinkholes and caves and underground rivers and rocky bluffs with sheer cliffs where endangered falcons live. And, bluffs that breathe cold air where ice age holdover relic snails and orchids live. We really wanted to decode everything because when people fully understand something and the lightbulb goes off, that’s when they really get passionate about it. 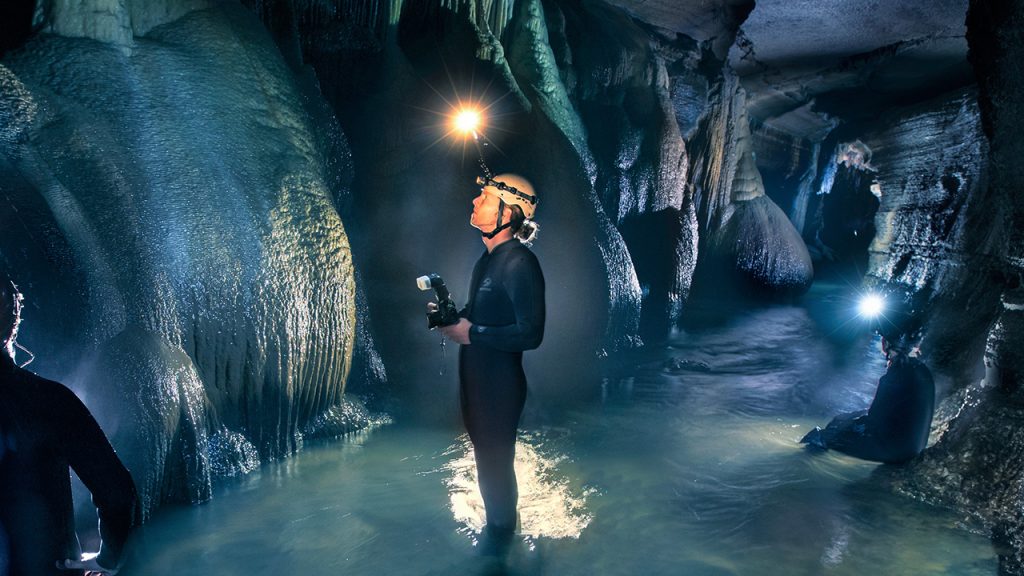 PBS Wisconsin: Is there anything new that you learned about the region that you didn’t know prior to making this film?

Howe: I didn’t know about this underground river down in Decorah, Iowa. I’ve been in caves that had little streams and stuff. Right before we started shooting, I saw somebody post a video of this cold water cave in Iowa, and I was just blown away. So I got a hold of them and said, “We need to film down there.” There’s data that shows there are probably thousands of underground rivers all over, under the bluffs here. I wanted to put that in the film because think about how that changes people’s attitudes. “Oh, the Driftless isn’t just what I see above ground. It’s all this stuff that’s under us.” If you can get people thinking about what’s underground and show them the whole water story … if you can teach people that, you have a great chance of having them give a darn about water quality. The Driftless is more vulnerable because you have sinkholes and areas where the water moves down the land so fast, and it doesn’t get filtered.

PBS Wisconsin: What do you hope viewers take away from the film?

Howe: It’s so much more than a science documentary. It’s a piece that really moves people, touches their hearts. We hear about it all the time from people that say, “This has changed the whole way I look at things here. I never knew we had all this stuff here that was unique in North America or unique in the world.” And then they are very curious, so we’re creating millions of people that have a new awareness and interest. Once they connect with nature and this cool stuff in the Driftless, they will be conservationists, they will be advocates. You can’t help but be that way.