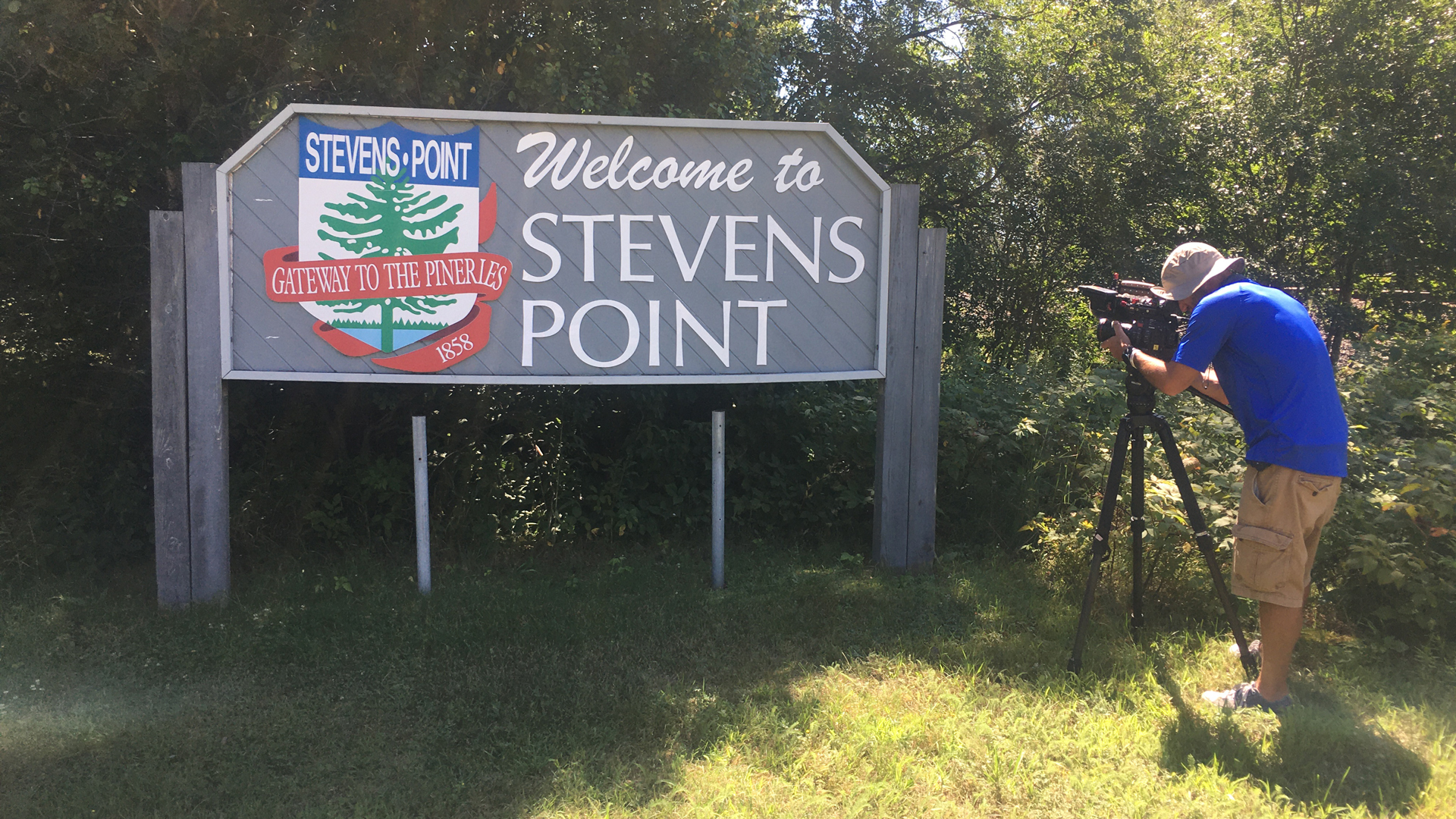 PBS Wisconsin’s ongoing local history project aims to tell the story of Wisconsin one town at a time. The newest installment in the series, Wisconsin Hometown Stories: Stevens Point, tells the story of a central Wisconsin city shaped by its natural resources and guided by dedication and ingenuity.

It premieres 8 p.m. Monday, Oct. 25 on PBS Wisconsin. The program will also be available for free on-demand streaming online at wisconsinhometownstories.org and on the free PBS App on streaming devices and Smart TVs.

Take a look behind the scenes with producer Holly De Ruyter, who shares some stories about making a Wisconsin Hometown Stories documentary. 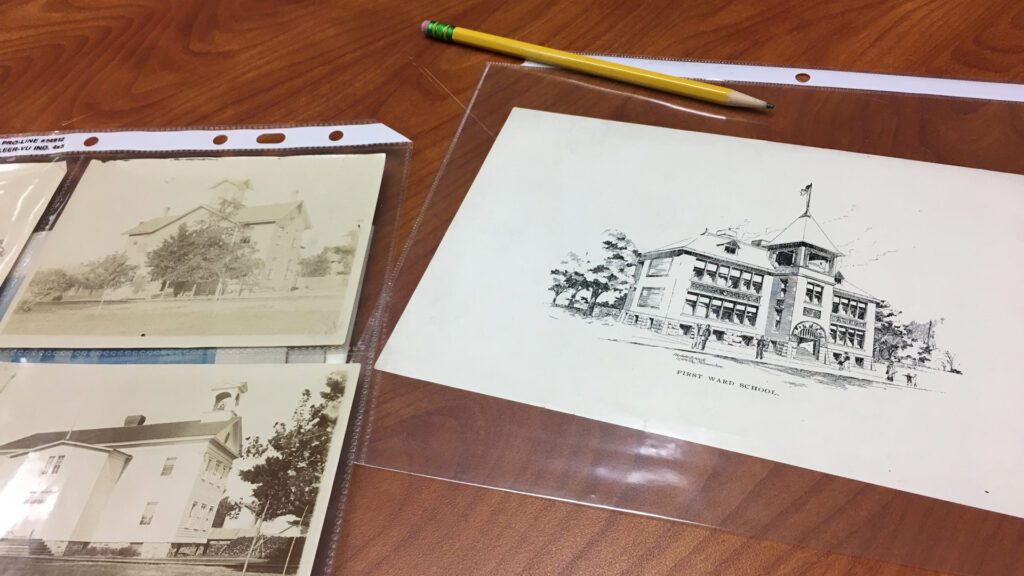 When you’re making a history documentary, you need visuals to help tell the story, and collecting archival images for this program was a real challenge for a few reasons. In October 2020, Donna Crane, production manager at PBS Wisconsin, and I had to collect archival images when there were no COVID vaccines available to us yet. So, our time in the archives was limited. I didn’t take many pictures of our process because we were so busy, but the staff was super helpful, and we got what we needed. 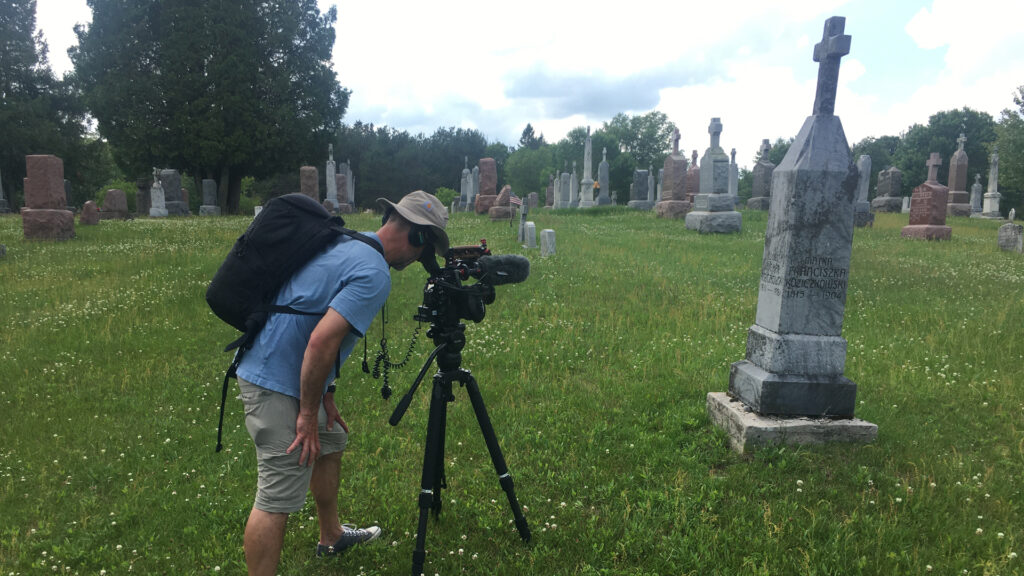 Then we had to think of creative ways to document details of a story where there is limited archive saved. A lot of people think, “Why didn’t you tell this story?” and sometimes you have to say, “Well, if the archive isn’t there, we can’t do it.” For example, sometimes there are no photographs of a key person like Michael Koziczkowski, the first Polish settler to come to Stevens Point. There’s a sketch of him and then nothing else. But we talk about him for a section when we needed to have other visuals, and that’s when you get creative and film a grave. 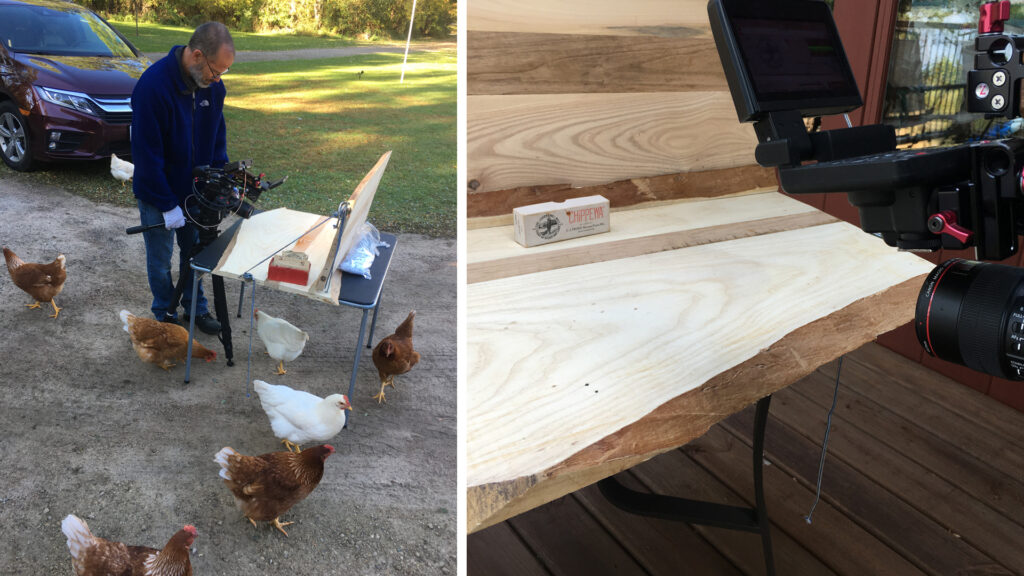 Other times, we had archive available, but it presented different challenges. With the fly-tying story, there was a lot of archive that we needed to show, but couldn’t scan. They were objects, so we needed to film them. The objects were in different locations with different owners, and we wanted to have a consistent background that wouldn’t be distracting and connected with fly fishing. A wood background suggested nature and would be nice and clean and simple. Cailin Short, from our scenic department, made us this portable backdrop. That’s something that people aren’t going to notice, but we put a lot of time and effort into making it happen. 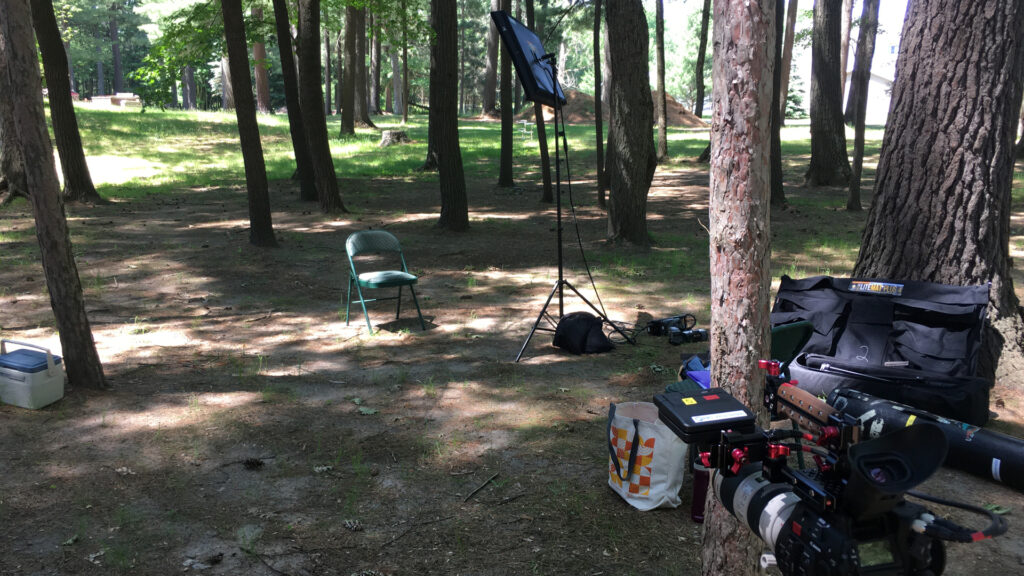 Part of the challenge with interviewing people is making the background look motivated and not random. For example, we interviewed reporter Gene Kemmeter about a lot of early history among these pines because Stevens Point is known as the “City of Wonderful Water,” but it’s also known as the “Gateway to the Pineries.” It also really spoke to the lumber history, so these visual cues remind the viewer of the place we are and what we’re talking about. This location was a campus in Stevens Point where an order of nuns had been living. They were moving out when we were there, but they were very generous, and they let us come on their property to film our interview. 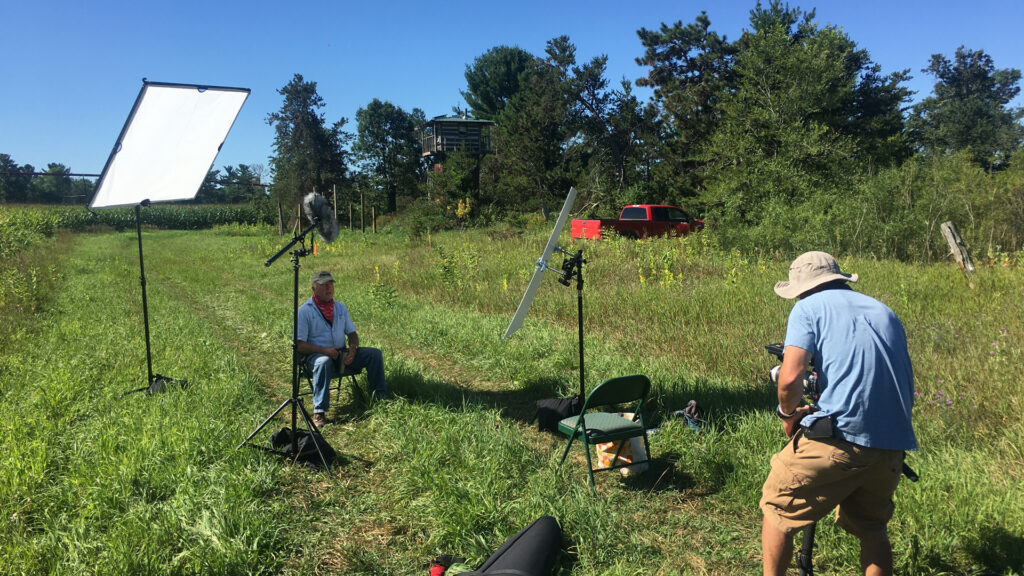 We filmed almost every interview outside to use locations that made sense, but also to be safe during the pandemic last summer. For our Justin Isherwood interview, we had to drive through a farm field to get to the location, and we were taking our own personal vehicles. I have a Camry, so I thought, “Oh, my husband’s going to love this. This is not a farm car.” 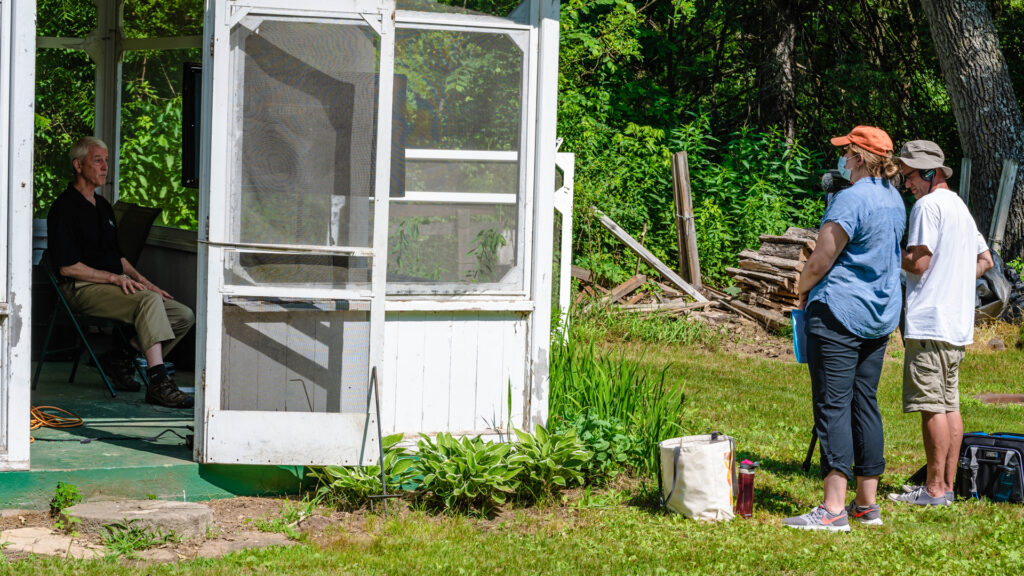 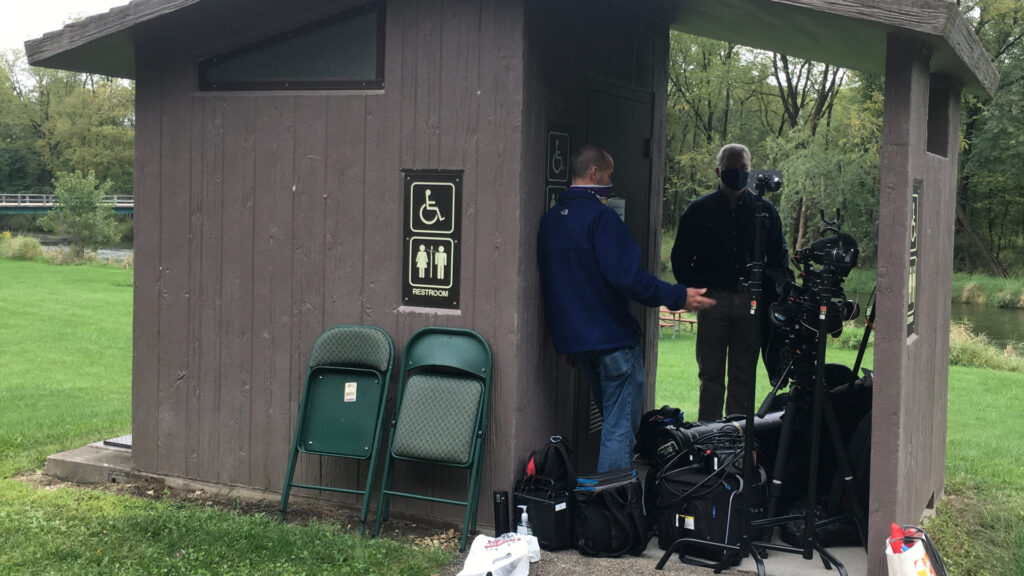 Only one shoot got rained out if I remember right. We tried to beat the rain and moved everything earlier in the day. We thought, “Yeah we’re going to get this interview done before the rain comes!” And then the finest little mist came through and wouldn’t stop. So we were hiding under the only shelter in this park to protect the equipment. Everyone thinks that filmmaking is so glamorous, and you’re huddling by bathrooms sometimes. 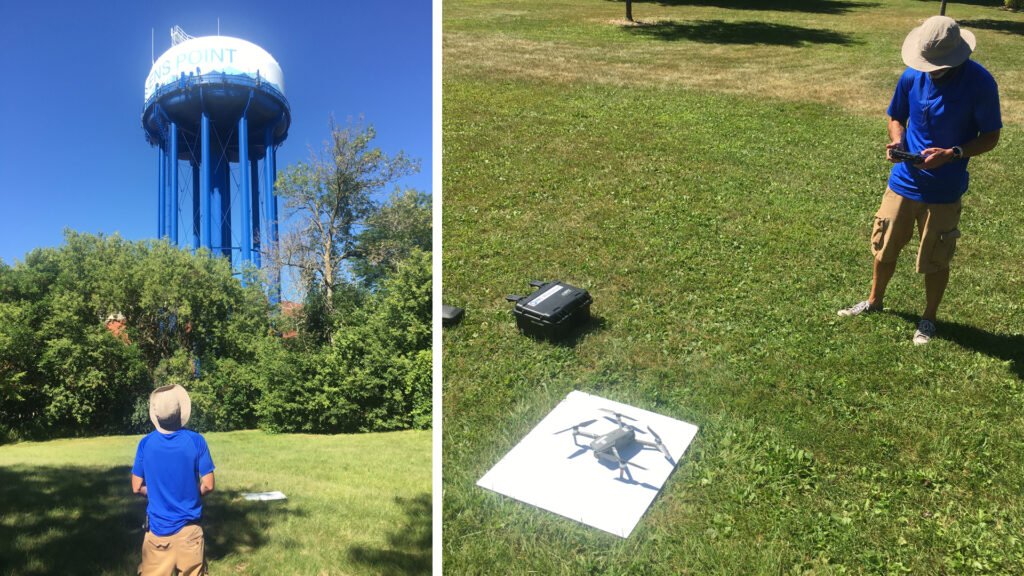 The Stevens Point water tower is an image throughout the documentary, and Mike Baron, cameraperson and editor at PBS Wisconsin, used a drone to capture aerial footage. We use a white board to give it a solid place to land, but then it also helps Mike when he’s looking at his viewer and he sees this big white dot, so it also makes it easier to navigate. 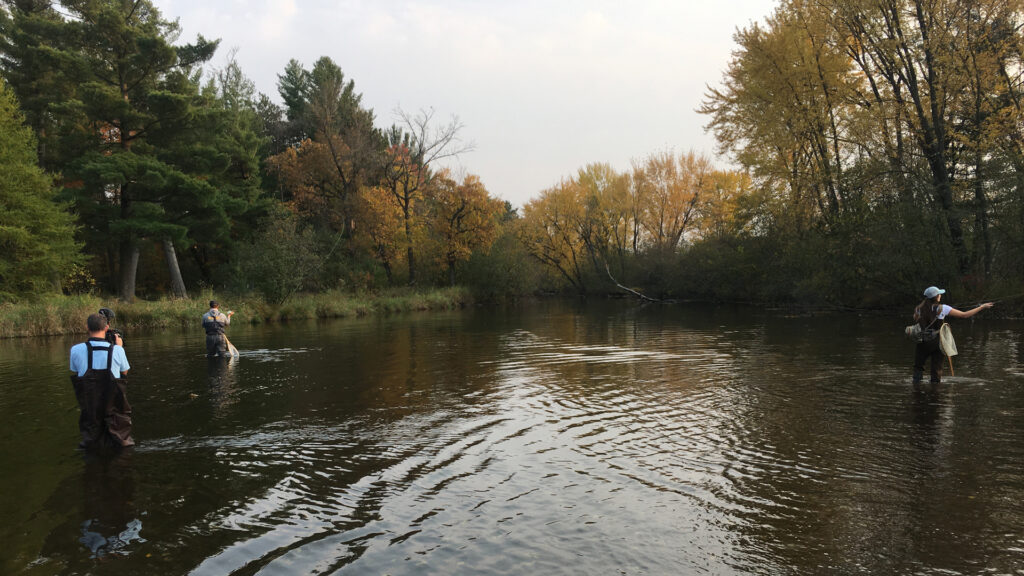 Craig Cook from Fall Line Outfitters was very helpful and not only fly fished for us on camera, but connected us with the other fly fisher in this shot. I wanted to film some people fly fishing, but one of them I wanted to be a woman because the fly-tying story centers around Carrie Frost and her impact on that industry becoming huge in Stevens Point. Plus, she mostly employed women fly-tiers.

When I would look for stock video or images of someone tying a fly, it was all man’s hands. It’s funny how we have this history of women making these flies, but now it’s mostly men. There’s definitely women out there fly fishing and fly-tying, but the representation is mostly men.

Craig also made sure we had some waders for the camera guys. It was really nice of him because the camera guy was able to get in the water and get some really nice close up shots. The water was a bit cold if I remember; this was in October. We did some drone shots, but those up close shots are key.