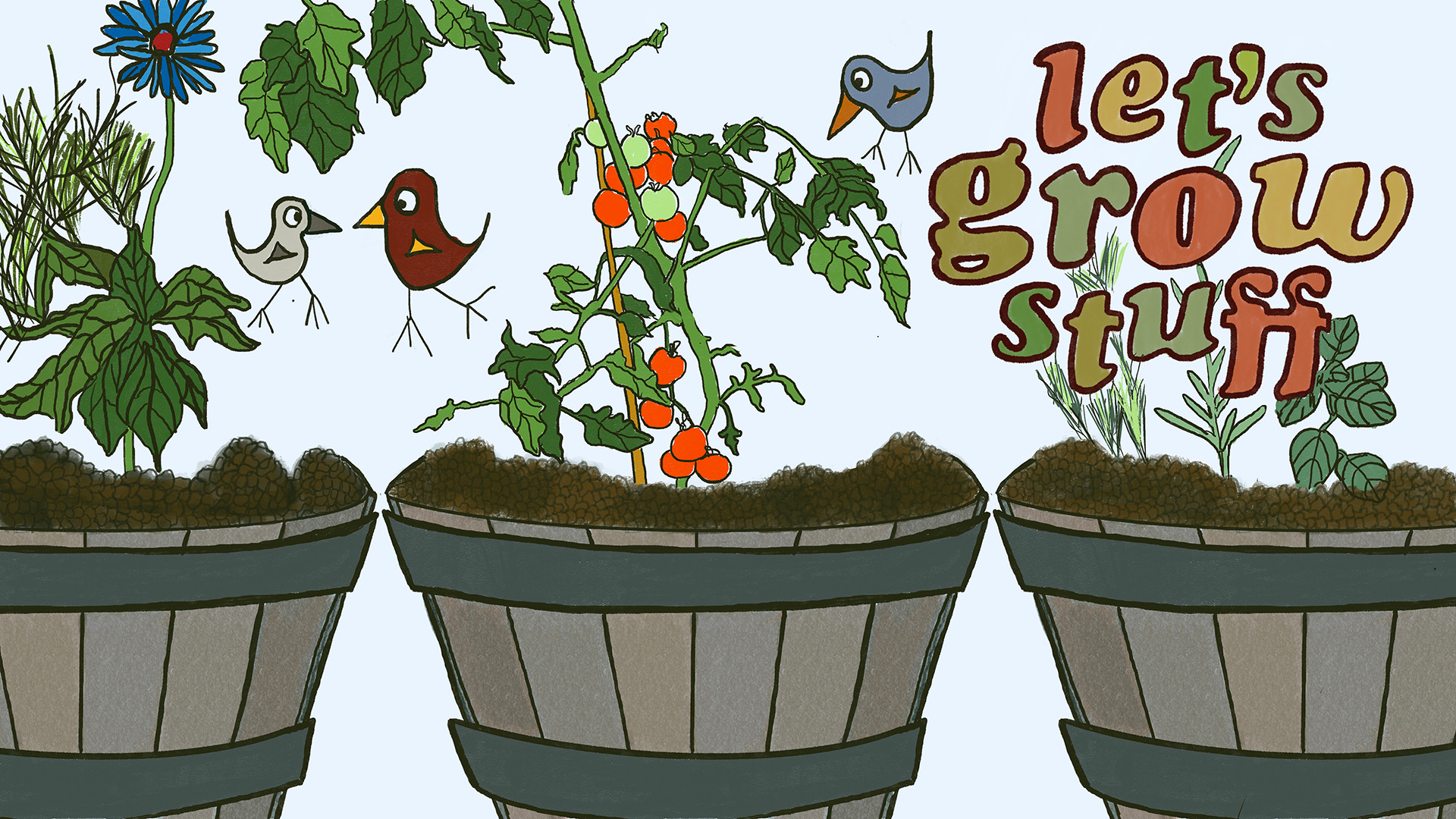 Greetings from the balcony garden! It’s Sig, here, crawling my way through the hot n’ heavy months of summer and the growing season — learning-by-doing with my first substantial urban container garden.

When we last checked-in, I’d recently turned my plans into plantings, establishing early summer crops and cherry tomatoes for the late season, noting my initial observations.

Since then I’ve harvested salads, snipped flavorful chives and parsley, made a mean dill dip, and eaten a handful of The Most Delicious Sweet n’ Crunchy Amish Heirloom Snap Peas of All Time™.

I’ve also learned that summer heat — the real stuff, 85 degrees and above — is both friend and foe, loved by some vegetables, loathed by others. And in encountering a few set-backs, I’ve gained new gardening insights that will help the next growing go-around.

What I learned from PeaGATE 2022

In June, I mentioned worries that I planted snap peas too late for a cool season crop — registering concern that one substantial heat wave at the start of summer would botch up the growth and yield of the plants. I was right. Or, more honestly, all the literature on snap peas ever written was right; I just learned the hard way.

Despite successfully starting peas from seed in late May and watching them bravely climb a trellis, a week of soaring temperatures in mid-June packed a punch. The plants measurably slowed their roll and some of the foliage turned a pale yellow. 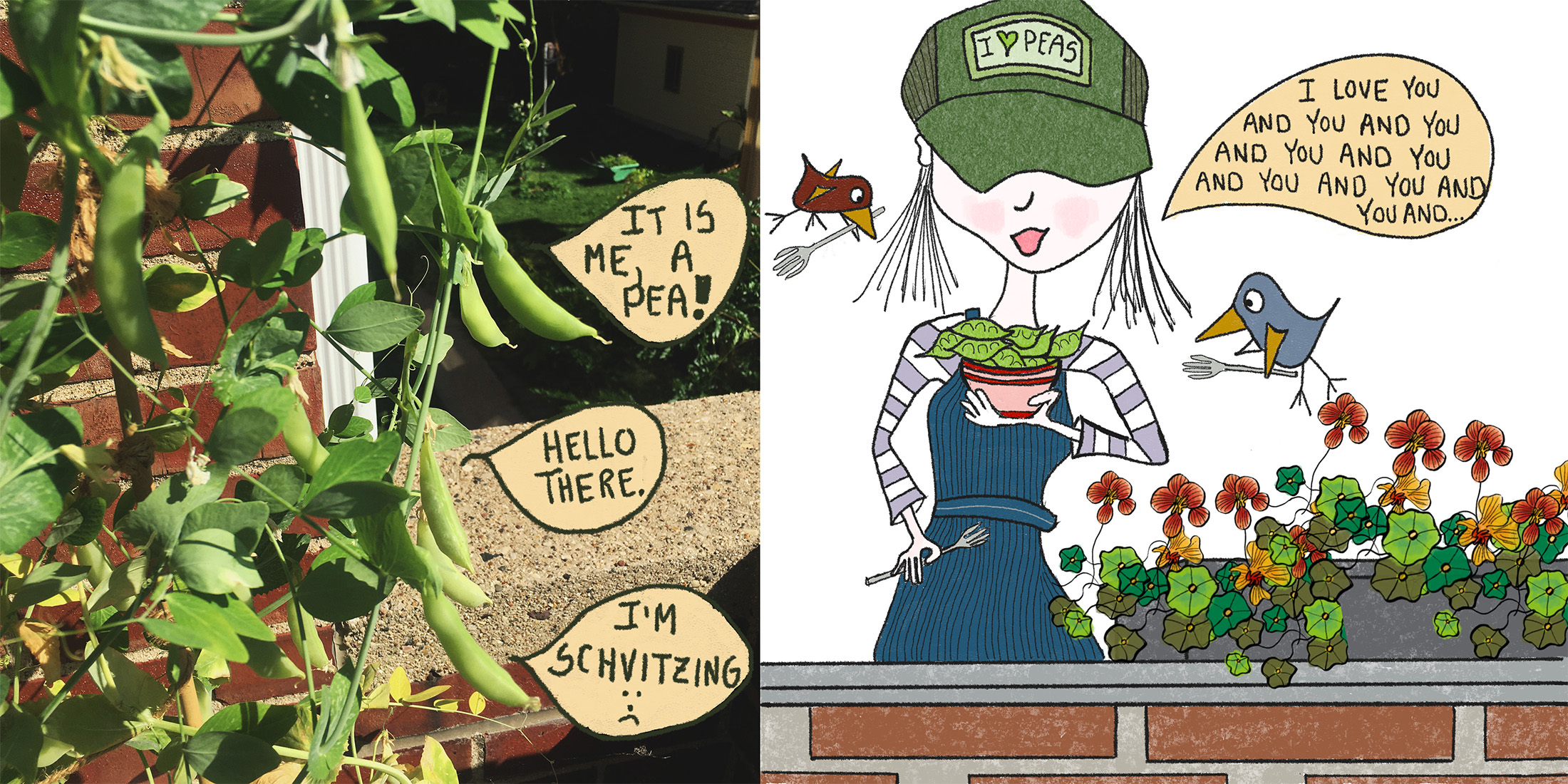 Despite this, a few actual snap peas did arrive! Maybe not a windfall, but those were the tastiest and proudest 33 snap peas I’ve ever eaten. What I learned is that peas are hardy suckers, and in the future I’ll have a go at planting them in mid-late March (instead of May) for a next-level Peapalooza.

The red leaf and green leaf lettuces and avon spinach I planted responded similarly to sweltering weather. While I harvested a respectable amount — trimming leaves from the outside, starting from the bottom (instead of using the “cut and come again” method that Qwantese recently demonstrated) — a heat wave while I was out of town for a conference caused the plants to bolt. 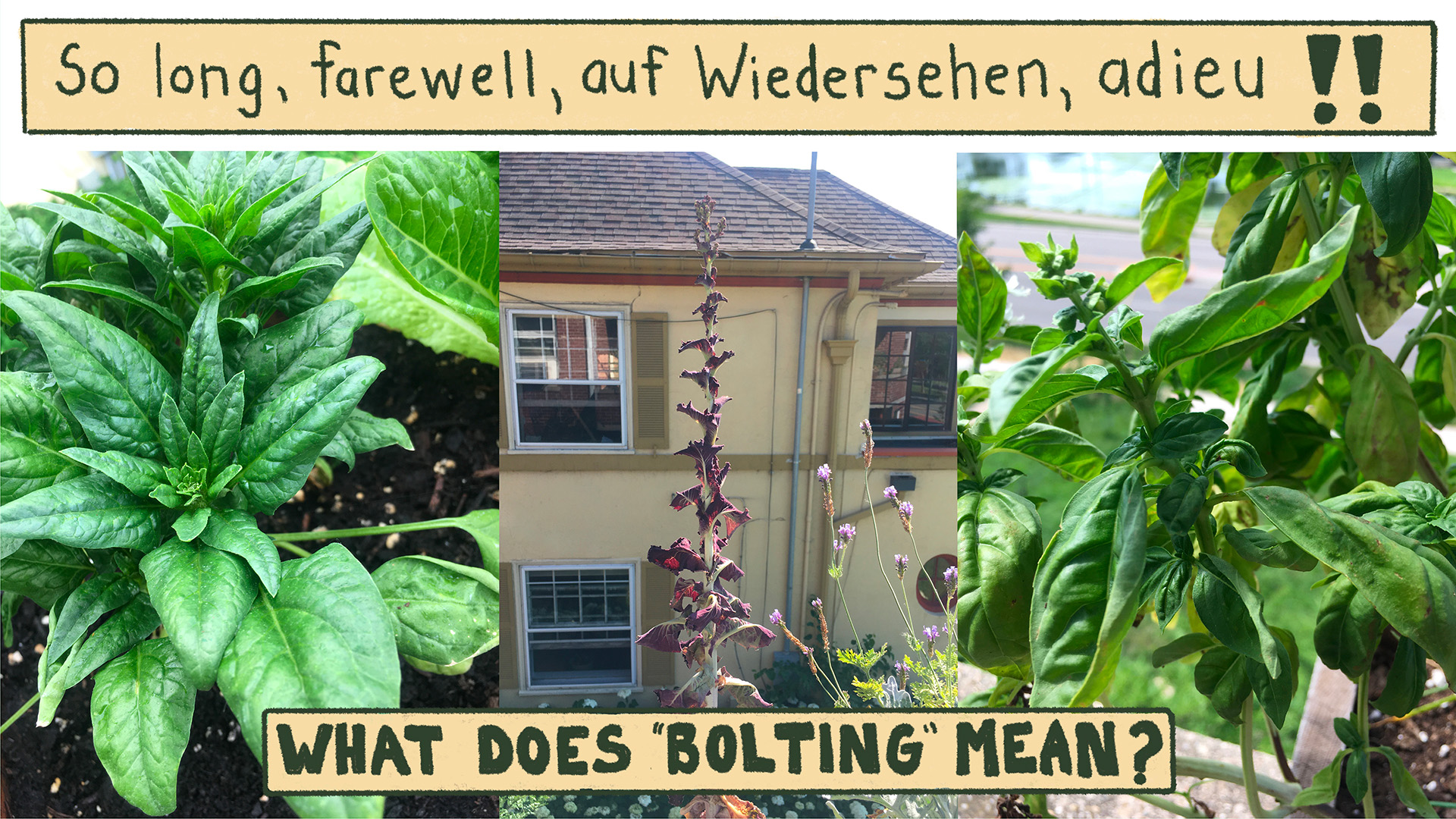 So, what is bolting? When a plant bolts, this means it begins to stop producing leaves and gradually produces a tall stalk which ultimately flowers and turns to seed. The leaves of your lettuces, for example, will begin to turn upright. Their structure will change — they’ll grow tougher and more bitter tasting (I tried some and, Reader, they were not delicious).

Bolting means you should stop harvesting for eating, and consider whether you will wait until the plant is ready to collect seeds, or remove it entirely and plant something new.

A maiden voyage in saving seeds

I wanted to make the most of my mishaps, so I embarked on a first attempt at saving seeds! I think that’s a really neat thing about gardening — that, if you choose, your first investment in seeds or transplants doesn’t have to be a sunk cost. And it turns out it’s pretty simple! 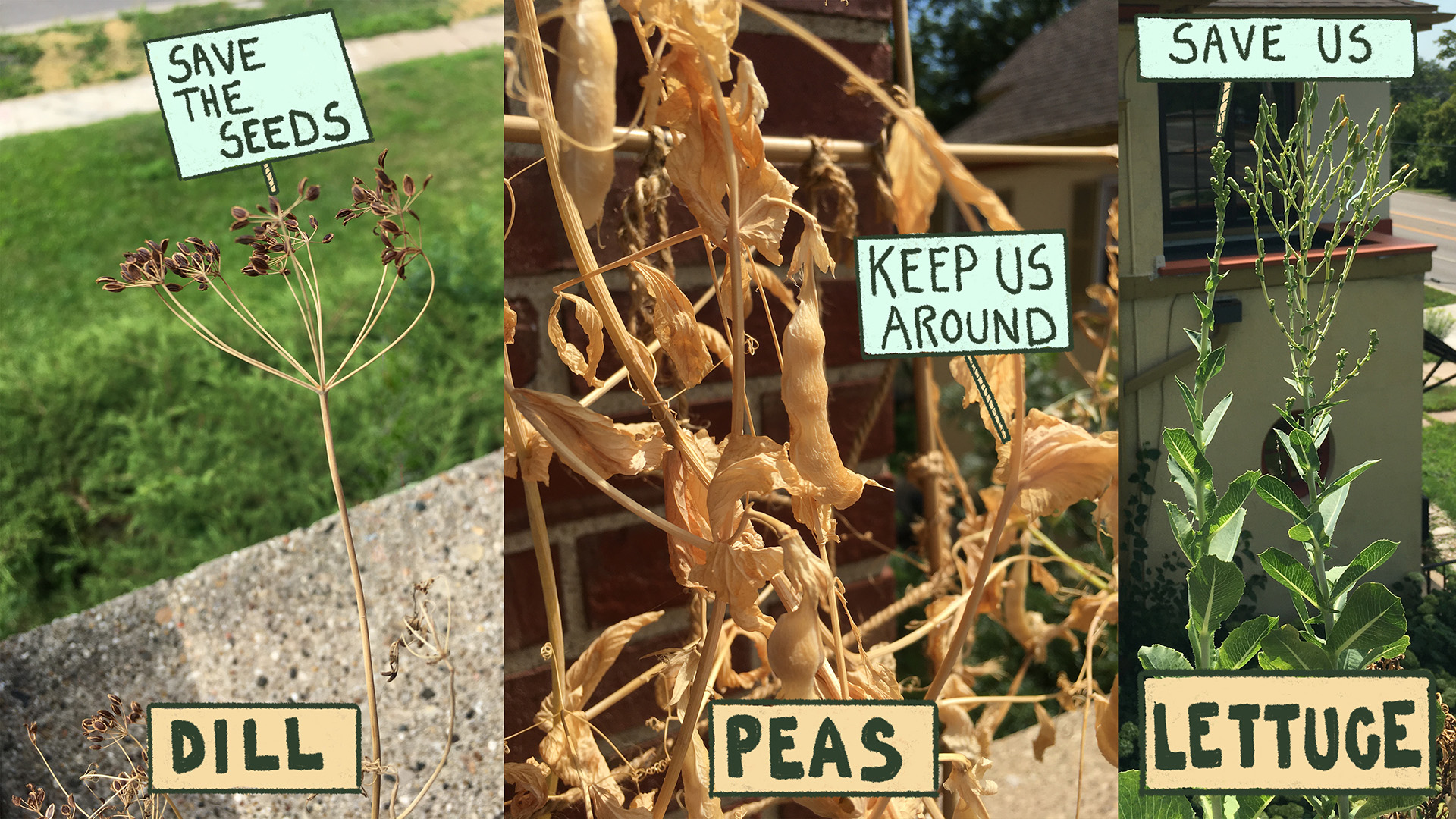 After they bolted and flowered, I let the dill, avon spinach, snap peas, and green leaf lettuce plants completely dry out in place, then took the larger snap pea seeds out of their pods, and lightly crushed the dried flower heads of the other plants over a paper plate. Once collected, I place them in seed saving envelopes (though you can also save them in any covered, dry container) and am storing them in a cool, dry place out of direct sunlight.

And with all four of these, given they are cool season plants, I can try to plant them again for fall or wait until early springtime! 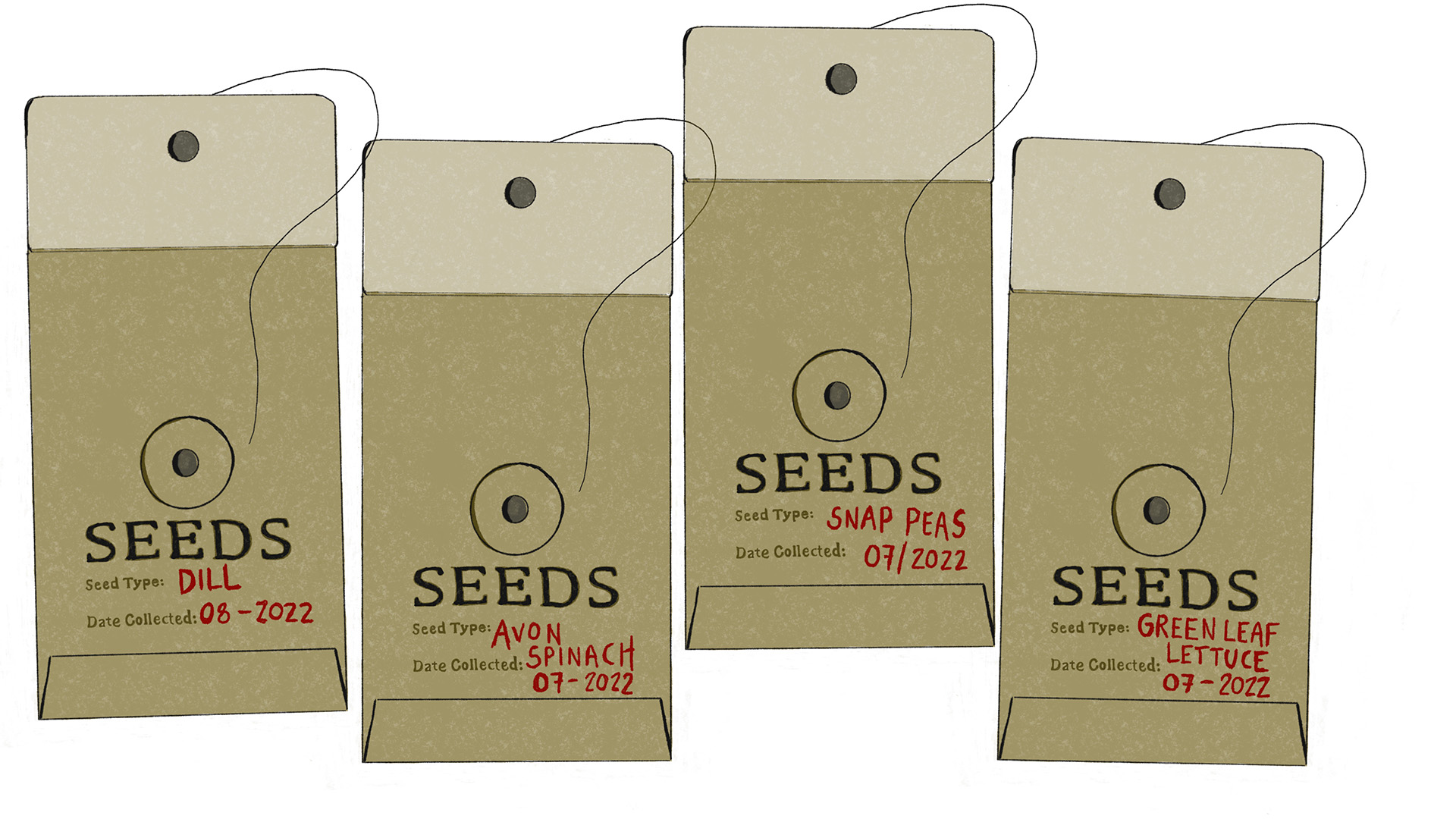 With the snap peas spent in July, I decided to replace the crop in that deeper container with a packet of climbing french pole beans, which thrive in the hot temps. This is one form of succession planting.

It’s my first try at growing beans, so I just followed the directions to sow seeds directly, 2 inches apart and 1 inch in depth. I built two bamboo stake teepees to help them climb, reusing the stakes of the pea trellis. I also learned that the peas “fix” nitrogen to the soil — necessary for plants to grow — and form a symbiosis with soil bacteria. So, all I needed to do for the succession planting was cut the dried pea plants at the base, till the soil, add a small bit of compost and the container was ready to plant!

In the shallow boxes on my balcony I replaced all the potting soil and planted hot weather herbs — thyme, oregano, sage, and rosemary — along with some pretty flowering verbena to attract pollinators. And my two varieties of cherry tomatoes just began to produce! They’re getting heavy with green, “almost there” tomatoes, so I’m excited for Qwantese’s upcoming episode on pruning to help me manage the growth!

That’s about it for this update! I’ll be back for some final reflections in early September. Thanks for following along. I’m wishing you and your container gardens well in the waning weeks of summer.