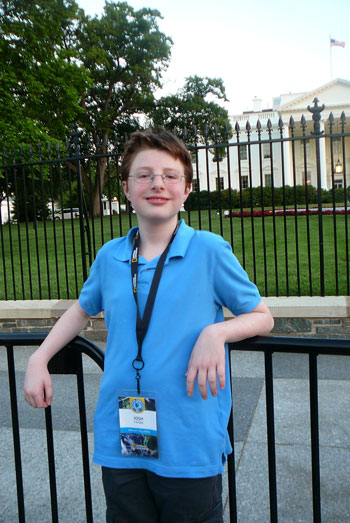 I asked Josh if he could sum up why Wisconsin Public Television is important. He said: “Public television has been one of the main kick-starters of my whole curiosity.”

Josh and his mom Heather called me recently to chat about a trip they took to Washington D.C. a few weeks ago. Josh, who just finished seventh grade, won the 2015 Wisconsin National Geographic State Bee and became the Wisconsin representative at the National Geographic Bee in Washington. He was one of 54 competitors, and it was his first trip on an airplane. Both he and his mom said it was a great experience – except for the fact that they didn’t get enough time to see all of the Smithsonian.

Heather had told me in an earlier conversation that they didn’t have cable, and that PBS Kids was the only TV she allowed Josh and his brother to watch when they were growing up. Josh confirmed that today. He told me that, when he was younger, “I wanted to be a contestant on Fetch! With Ruff Ruffman so bad!”

Josh said: “At the GeoBee I met kids that are actually like me.  Being from a small town – I feel… a bit unique.” His mom shared that in meeting the other kids and their families, they realized that most of these kids, like Josh, don’t cram or study specifically for this competition – they are just interested in learning, and in the world, and tend to pick up these facts. Josh spends loads of time on Wikipedia, watches Nature and NOVA and is also into weather, geology and physics.

We are looking forward to watching where Josh’s curiosity leads him next! What has WPT inspired you to learn more about?