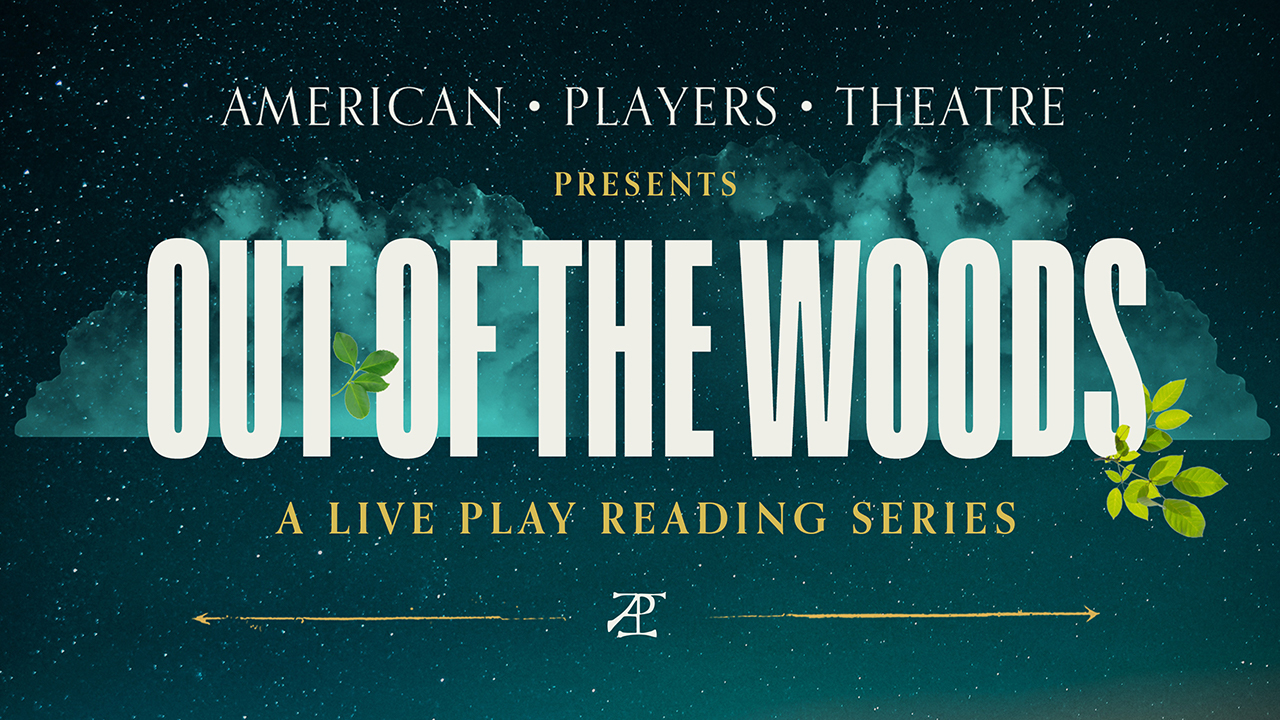 Come Out of the Woods With American Players Theatre

Imagine the thrill actors feel when they step on stage in front of a large audience and pour all they have into their characters. Now imagine those same actors performing in isolation, from the confines of their own homes, playing to the tiny camera on their computers…on a Zoom stage!

That’s what American Players Theatre in Spring Green has accomplished this summer with its Out of the Woods play reading project. The APT core acting company, along with their artistic and technical teams, delivers an engaging and affecting series of six plays in six weeks — an ambitious undertaking! — performed and recorded live, and shared on-demand by PBS Wisconsin. 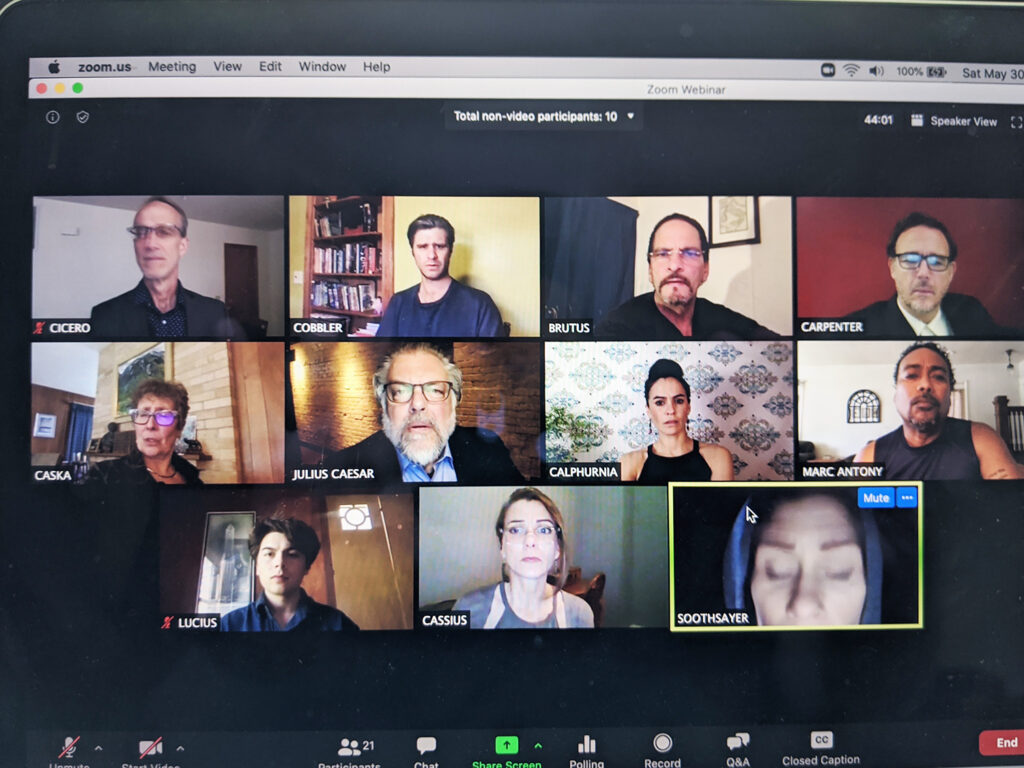 A snapshot of a “Julius Caesar” rehearsal. This complex production featured 14 APT actors who portrayed over 30 different characters.

Play readings range from Chekhov, Shakespeare and Shaw, to contemporary playwright Carlyle Brown and a world premiere by James DeVita. A new play is available each Friday at 7 p.m. from June 12 to July 17 — premiering on the PBS Wisconsin Facebook page and streaming on our website. All six readings are available online and on the free PBS app on your phone, tablet, other digital TV devices and smart TV’s through August 9.

PBS Wisconsin is proud to partner with APT to capture and share these readings. We are thrilled to offer our audience a new (and safe) form of “theatre-going,” support a beloved acting company, and expose theatre fans to the inventive and imaginative ways the APT team exploits the affordances of web conferencing technology and our “safer-at-home” environment to produce a dazzling “show.” 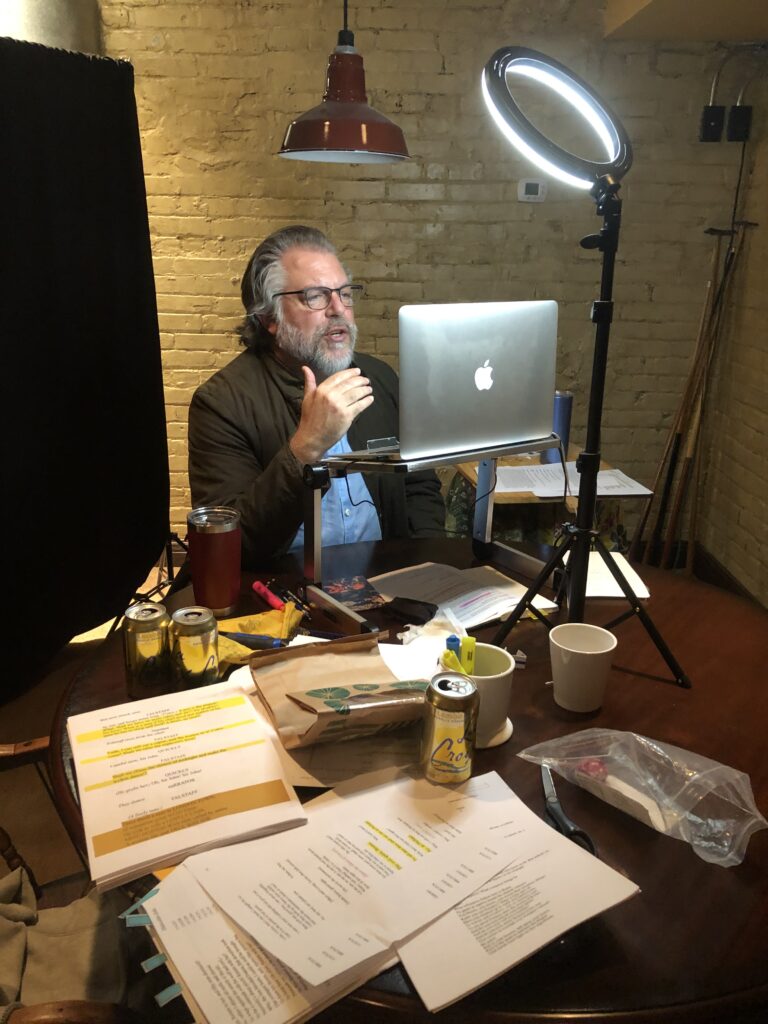 Actor Brian Mani’s home setup for the Out of the Wood play reading series.

The actors not only embrace their characters but become their own scenic and lighting designers, do their own hair and makeup, and create costumes with whatever they have in their homes. They perform from their closets, kitchens, attics and basements. With assistance from the APT directors and technical staff, they create an array of lighting scenarios depending on the play’s scenes — ask the actors how many of them nailed sheets to their windows!

Each play is staged, rehearsed and performed in just six days. Masterful direction of the play readings produces an authentic sense that the actors are interacting with each other directly. This transports us away from the reality that they’re acting to a web camera while reading scripts on their computers. Creativity abounds as characters “hand off” a piece of paper, a cup of wine or some chocolates to another cast member. 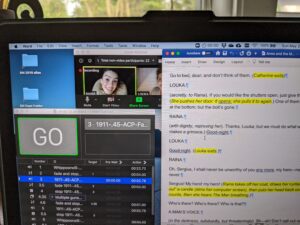 A closeup of a computer control panel stage manager Jacqueline Singleton uses to cue actors and play sound effects during the “Chekhov One Acts” play reading.

“Backstage” in Zoom is controlled by stage managers Jacqueline Singleton and Evelyn Matten. They manage all the technical details of each reading – cueing actors to enter a scene, activating and muting actors’ audio, playing music and sound effects.

Technical difficulties typically arise during a traditional play performance, and this is no different with a Zoom play. During two readings, several actors have lost their internet connection and had to quickly move to other rooms to reconnect. Perhaps this is a new version of the rain delay which sometimes occurs at APT’s gorgeous outdoor stage in Spring Green!

We invite you to enjoy these six play readings online. And please stay online after each reading for a fascinating talk back as the actors and artistic team discuss the play, the characters and the technology. Playwrights Carlyle Brown (Are You Now, or Have You Ever Been…) and James DeVita (An Improbable Fiction) join the talk backs to discuss their work.

Congratulations to the wonderful actors and staff at APT for a stunning feat of pandemic play-acting!

This blog post is guest written by PBS Wisconsin Cultural Affairs Producer Deb Piper. Deb is the lead producer on the PBS Wisconsin side of the Out of the Woods series.