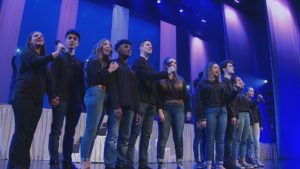 High school students from across Wisconsin will be featured in a televised broadcast of the 2019 Jerry Awards, honoring the top high school musical theater performances from around the state.

The stars of the future shine in Wisconsin Public Television’s (WPT) broadcast of the 2019 Jerry Awards. The one-hour program premieres 8 p.m. Monday, Sept. 30 on WPT; it is also available to stream online at wpt.org.

The 2019 Jerry Awards broadcast celebrates excellence in musical theater by featuring top performances from the annual award ceremony, held in June at Madison’s Overture Center for the Arts. Award-winning performers include full-cast production numbers, as well as lead and supporting performers.

This year, the Overture Center for the Arts and its partners in Milwaukee, La Crosse and Wausau reviewed a total of 98 musical productions, from 92 high schools and community youth theater programs in counties across Wisconsin.

“I think every year the level of talent in this program just gets better and better!” said WPT producer Deb Piper. “It’s a testament to the dedication of Wisconsin’s students and educators in the performing arts. WPT is pleased to partner with Overture Center for the Arts to share these wonderful performances with our viewers across the state. Our viewers consistently tell us that these broadcasts are a highlight of their year.”

The 2019 Jerry Awards broadcast is part of WPT’s multiyear Young Performers Initiative, which celebrates Wisconsin’s young artists and those who inspire them.

The Overture Center’s Jerry Awards program, which began in the 2009-10 school year, is an educational initiative that recognizes, honors and encourages excellence in musical theater production among Wisconsin’s high school students. The awards were renamed during the 2017-18 season in honor of philanthropist and arts supporter W. Jerome Frautschi. Educators and industry professionals review productions from around the state, providing valuable feedback. The program elevates the importance of musical theater within high schools.

Funding for the 2019 Jerry Awards is provided by Julie and Larry Midtbo, A. Paul Jones Charitable Trust, Mary Ellyn and Joe Sensenbrenner, Thomas Terry and Friends of Wisconsin Public Television.

Wisconsin Public Television is a service of the Educational Communications Board and University of Wisconsin-Madison.