Introducing our Around the Farm Table blog - now with more goats! - PBS Wisconsin
Skip to content 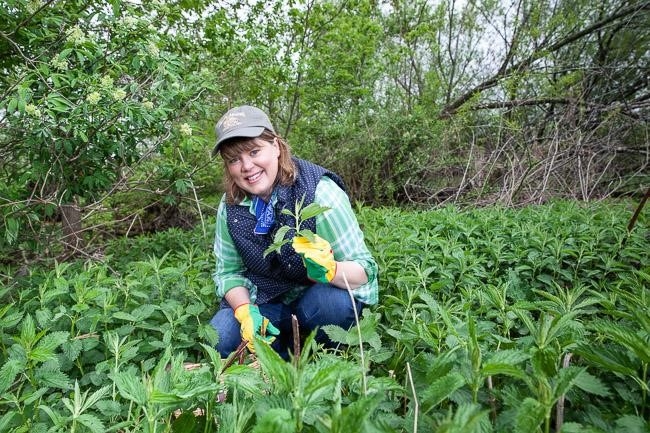 Introducing our Around the Farm Table blog – now with more goats!

This season, producer and videographer Colin Crowley joins us each week to share some behind-the-scenes tidbits in a blog.

In the premiere episode, “Goats in Wisconsin,” it takes real dedication to get some great goat footage, and that’s what we’ve got!

But there’s still no way to plan for some… unique obstacles, as Colin shares in his first blog post.

Read on for some delicious tales!

Dispatches From the Field
Colin Crowley

On a chilly day in May, I am trying to frame up a shot of Around the Farm Table host Inga Witscher when I feel a jolt and realize something is wrong. No matter how hard I try to keep my shot steady, the camera keeps shaking. I lower my eye from the viewfinder and immediately spot the source of the problem.

There is a goat chewing on my tripod.

I look over to my fellow videographers and see that they are having similar issues. A small herd of curious goats is taking determined bites of pant legs, ramming their heads against the humans’ thighs, and chomping dangerously close to their zippers. We all call “CUT!” and take a moment to laugh at the absurdity of our situation.

Filming a show that regularly requires us to get up close and personal with farm animals has taught us to expect certain difficulties, but filming an entire episode about goats in Wisconsin gave us some new challenges we couldn’t have anticipated.

As producer of Around the Farm Table, I work together with host Inga Witscher and her father, Rick, to come up with show ideas for people, places, and animals that we can film to make the show as interesting as possible for our viewers. When it came time to plan out the episodes for the upcoming season, we all agreed that we wanted to make a show about goats in Wisconsin.

In a state where cows are a permanent fixture on the landscape, it’s understandable that most Wisconsinites don’t give much thought to goats in agriculture. We’re hoping the season premiere of Around the Farm Table will change that.

For this episode, we traveled around the state to visit with three farmers who have found different ways to make a living with goats.

Our first stop brought us to Cross Plains to meet Diana Murphy, the owner of the hungry herd who nearly derailed our filming with their insistent curiosity about the taste of tripods. Diana is a dairy goat farmer who produces handcrafted, artisanal cheeses from the milk her goats produce every day.

Far from being an anomaly in Wisconsin, Diana is part of a growing industry of dairy goat farmers that has increased so much in recent years that Wisconsin now leads the nation in dairy goat production.

Up the road in Mondovi, farmsteader Julie Maro has found another use for goat milk by turning it into a boutique line of soaps that she crafts in her kitchen and sells online and in stores.

For our final stop, we encountered the last of our goat episode trials by hauling our camera gear up a steep ridge in Steuben, Wisconsin. It was here that we met with Jesse Bennet and one of the many herds of goats he leases out to clear brush and invasive species from protected natural areas.

Jesse started out managing these natural areas with chainsaws, controlled burns, and teams of employees before realizing that goats could generally do a better job than any tools or work crew. [Read about a similar effort on the UW-Madison campus here.]

By the time we arrived,  though, the goats were taking their midday siesta underneath the shallow canopy of brush at the top of the ridge. Not willing to leave the location without close-up footage of Jesse’s goats, we shouldered our gear, scaled the steep incline and pushed through the brambles with our bare hands until we found the goats. They were all too happy to show off their chewing skills for a public television audience.

The reward for our climb was one of the most spectacular views in the state. We think you’ll enjoy the reward of our climb this week in the season premiere of Around the Farm Table: “Goats in Wisconsin.”

Tune in next week – 7:30 p.m. Thursday, Oct. 10 – for “Preserving the Summer” and more behind the scenes action from Colin and the crew.