Around the Farm Table Blog: Silos and Sledgehammers - PBS Wisconsin
Skip to content 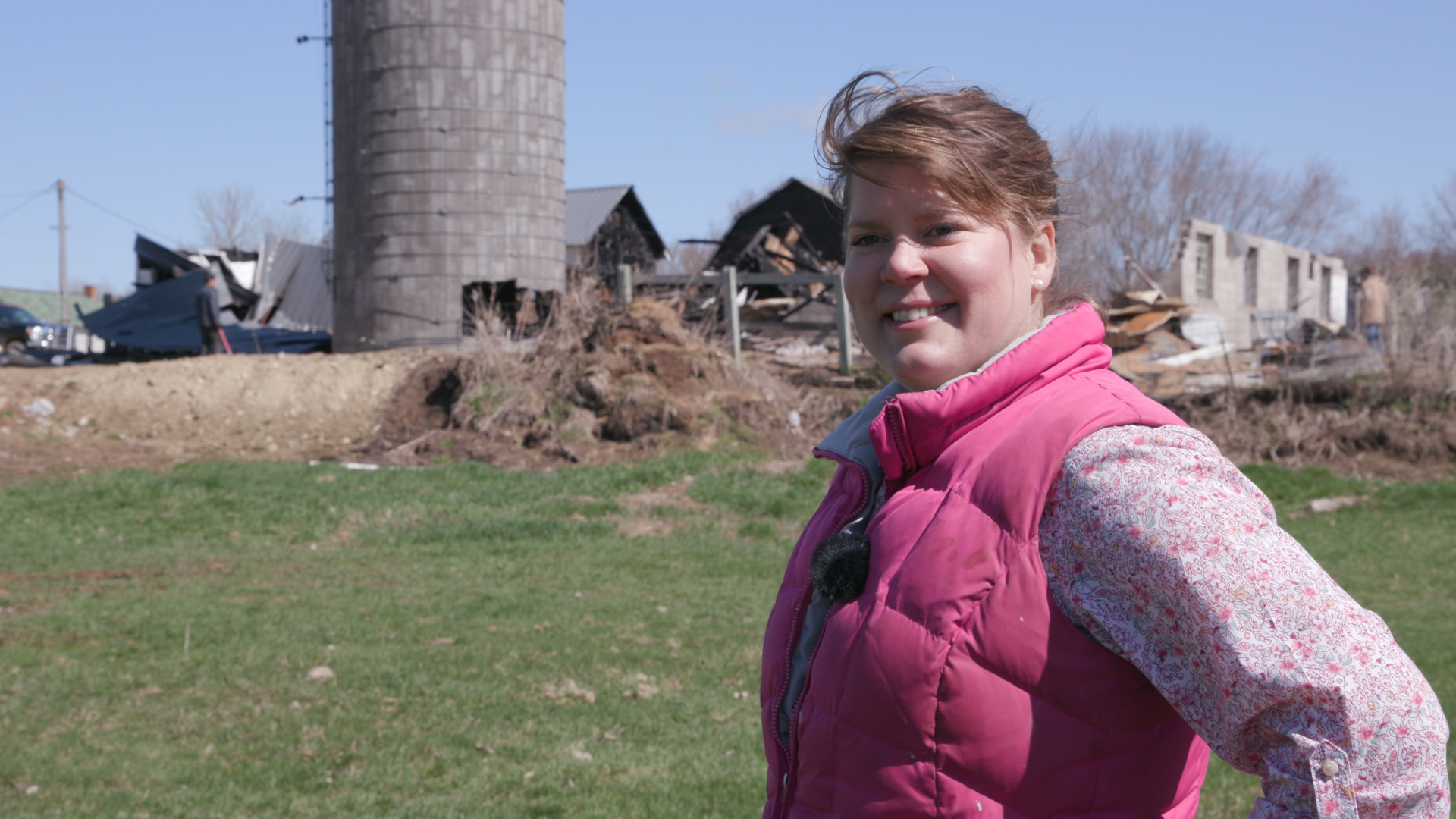 Around the Farm Table Blog: Silos and Sledgehammers

If it’s Thursday, Wisconsin Public Television programs are Made in Wisconsin! Producer and videographer (and determined backroads navigator) Colin Crowley is back, with a behind-the-scenes look at the third episode of Around the Farm Table.

“Spring in the Driftless” premieres 7:30 p.m. tonight on WPT. Join Inga and the crew to celebrate spring in the Driftless Area of southwestern Wisconsin! Inga visits an urban greenhouse in La Crosse, then travels to Viroqua to harvest wild ramps and meet a homesteading family. Finally, she prepares ricotta dumplings and ramp pesto for her neighbors, who have helped her recover from a barn fire.

We’ll get to the greenery in a bit. First, though, Colin gets to the real story behind this episode: making sure everything is in place (and not in danger of being squashed!) as Inga’s silo comes crashing down. It’s all part of rebuilding and celebrating new beginnings in the spring. Read on for more!

I’ll need to check with the Guinness people to verify this, but I’m pretty sure we set a world record during the filming of this week’s episode of Around the Farm Table: “Most Camera Angles Used While Filming the Demolition of a Silo.”

I’ve looked and looked on YouTube; as far as I can tell, the most anyone had ever used before was three cameras. For our show, we used five.

Let’s back up a bit: In November 2018, our host Inga Witscher suffered a tragedy when her barn burned down. Adding an extra layer of devastation was the fact that Inga and her husband, Chance, had nearly completed a renovation project to convert a portion of her barn into a creamery so they could begin making cheese at the farm. The fire meant setting back their progress by nearly a year, rebuilding from scratch.

As if that weren’t enough, the heavy snows over the next several months led to the collapse of first the adjoining hay shed, then the winter housing area. So… time to tear everything down and start fresh.

Not one to be defeated, Inga decided to make the best out of a bad situation and incorporate the cleanup process into the show. One of the few areas of the barn that hadn’t been destroyed was an old sixty-foot silo. It was still standing after the fire, but it would have to be brought down to make way for the construction of a new barn.

“We’re going to demolish the silo,” Inga told me, “and I want to film it for the next episode.”

To prepare for the event, Inga and her father Rick sent me links to various YouTube clips of silo demolitions. I had no idea that an entire genre of amateur videos devoted to silo demolitions existed, but before I knew it I’d gotten sucked into a wormhole of videos with titles like “Top 5 Mesmerizing Silo Demolitions” and “World Amazing Silo demolition torn down Awsome footage” [sic].

Don’t believe me? Just try not to feel the thrill as Siloman – “not a professional, just a local clown” – takes down a silo with the help of his intrepid Dodge… Intrepid.

Watching these oddly satisfying videos served as research to help us create a production plan for filming Inga’s silo demolition. After all, if you miss your shot the first time, you can’t exactly get another take.

On the big day, a group of local neighbors showed up at Inga’s farm with a sledgehammer and started knocking out the lower rows of tiles that support the structure of the silo. By this point, we had set up five cameras – including an aerial drone – in order to film the event from a variety of angles.

As the sledgehammer knocked out each block, the tension grew. We couldn’t help but second-guess our filming distance. As any videographer knows, the key to getting a great shot often means getting as close as possible to the action. But we also have to factor in our personal safety. I couldn’t help thinking to myself, “Am I really far enough away so this thing won’t flatten me when it comes down?”

(I’ll avoid giving away any spoilers as to what happened next. You’ll have to watch the episode yourself to learn if I made it out alive.)

Back to the episode’s theme: Just as everything that goes up must also come down, destroying something also means finding opportunities to create something new.

Building a new barn on the site of the old one is a good metaphor for springtime, and for the way life regenerates every year in the wake of a frozen winter. It’s also a testament to the resolve Inga has shown, turning an unexpected tragedy into something positive by addressing it on the show. Tearing down a silo could have been a sad moment, but she turned it into a celebration of new beginnings.

But back to the vegetables…

In celebration of spring, Inga visited two very different greenhouse projects in the Driftless Region. First, she started at Hillview Urban Agriculture Center in La Crosse, and learned how worms can be used to make top-quality fertilizer. She also made a stop at Birdsong Ridge Farm, meeting a young family of homesteaders using regenerative agriculture to establish a farm.

In between, she trekked into the forest outside of Viroqua with Bjorn Bergman of the Viroqua Food Co-op to forage for wild ramps. Wisconsin is home to this delicious wild plant, a member of the same family as onions and garlic. These flavorful reminders of new life only appear for a brief time in the early spring, but they’re a great reward for surviving the winter.

Learn how you can add a few simple ingredients – building from the ground up – and turn it into something new: a delicious springtime pesto. Add in some ricotta dumplings, and it made a tasty reward for the friends who helped bring down the silo – quickly and safely.

Miss previous episodes? Watch current and past episodes of Around the Farm Table online or on your streaming device – any time!

All Around the Farm Table videos