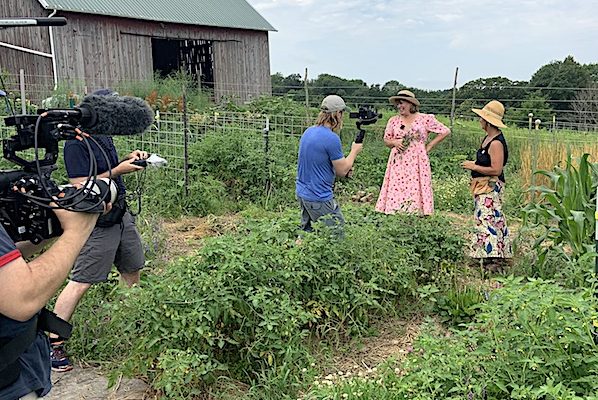 Producer and videographer (and occasional goat wrangler) Colin Crowley is back, with a behind-the-scenes look at the second episode of Around the Farm Table.

Fresh flowers will go into herbal tea from Sacred Blossom Farm in Mondovi.

“This week’s show is full of affectionate images of glistening ripe currants, sun-drenched flowers, and dedicated local farmers who make the most of the warm rays of the season,” says Colin, and who could resist that at any time of year? Read on for more!

The best places to film a television show are often the hardest ones to find. As we’ve discovered, a recurring theme on productions of Around the Farm Table is that Google Maps and GPS apps regularly fail us in our attempts to find our filming locations.

Hilltop Community Farm was no exception. On a bright July morning, after a pleasant drive over the hills between Reedsburg and La Valle, we found ourselves driving aimlessly around the small country roads that encircle Lake Redstone, seeking the farm in vain.

Several times, we passed the point our GPS app had pinned as our destination, only to find an empty field. To make matters worse, our cell phones had no  reception, so we couldn’t even call the farm owners to ask for directions.

As we slowed the van to a crawl, it must have been obvious that we were lost, because a neighbor pulled up beside us in his pickup truck and rolled down his window. “You’re lookin’ for the fruit farm, aren’t ya?”

“Drive up the road and take the next right. After a while, you’ll see a gravel road on the left. If you take that road up the hill, you’ll find the farm.”

We thanked him for his help. He smiled to us as we left, saying, “I’m looking forward to seeing what you guys film up there!”

Erin Schneider of Hilltop Community Farm holds some of the flowers and fruit she grows.

We soon found ourselves transported into a bucolic scene straight out of a storybook. True to its name, Hilltop Community Farm sits atop a sloping hill extending upward from the valley that contains Lake Redstone. A rehabilitated century-old farmhouse watches over a landscape of sprawling flower gardens, colorful vegetable beds, a restored native prairie buzzing with insects, and a small forest-like fruit orchard sparkling with the shiny red, white, and purple jewels of currants in the summertime.

It was a perfect summer day. As I looked around the farm, I knew we had found the ideal place to film our show.

Currants become jam in the kitchen with Inga and Cousin Cece.

“I want this episode to be all about preserving the summer,” Inga  told me. “So much of farming in Wisconsin is about preparing for the long winter, so I want to show all the work farmers do to capture the tastes they grow during the summer season.”

With this great idea as our starting point, we planned out visits to three small farms where Wisconsin farmers grow various kinds of currants, berries, apples, and herbs that make a special local blend of tea. In addition to Hilltop Community Farm, we visited Sacred Blossom Farm in Mondovi and Mary Dirty Face Farm near Menomonie. (The names alone are enough to inspire stories.)

We worked long days, filming until twilight to capture a bounty of fruits, flowers and herbs in their best light. These crops would eventually be picked, canned and dried in order to last through the winter, and we wanted to capture them in their full bloom and ripeness before the short growing season was finished.

Seeing and filming this process during the warmest, most luminous days of the year made me reflect on what it means to sip an herbal tea or taste a jar of preserves in the middle of the winter.

Tony DiMaggio grows herbs and flowers to make herbal tea on his farm in Mondovi.

When we taste these things in the cold seasons of the year, what we are tasting is not only the remains of the fruit or the herb themselves. We are also tasting the sun, the soil, the warmth and the hard work put into these plants during the summer to make these things last long after the sun and warmth of the season are gone.

In a way, I like to think that our work as a television crew does something similar. The footage we filmed for this episode also does something to preserve the summer. This week’s show is full of affectionate images of glistening ripe currants, sun-drenched flowers, and dedicated local farmers who make the most of the warm rays of the season.

Now that it’s October and the cool wind of autumn is making its presence felt, I like to think that watching this episode will allow our viewers to relive those sunny days of July one last time before the winter sets in.