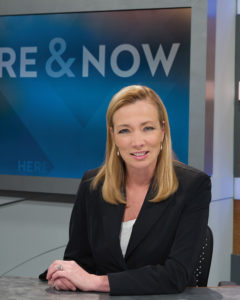 Frederica Freyberg is the executive producer of news and anchor of Here and Now, PBS Wisconsin's live weekly program that covers news concerning state issues and politics throughout the state. Freyberg also produces field reports for the program as well as news documentaries.

With an extensive journalistic career that includes more than 30 years as a reporter, Freyberg initially worked as a reporter for WFRV-TV in Green Bay. She moved on to Madison's WMTV-TV, where she produced, reported and anchored. At Milwaukee Public Television, Freyberg was a reporter, producer and host. While there, she worked with PBS Wisconsin on Wisconsin Week as a producer and substitute anchor. Freyberg returned to commercial news at WISN-TV in Milwaukee as a reporter before moving to WCCO-TV in Minneapolis, where some of her reporting assignments included covering western Wisconsin. Before coming to PBS Wisconsin full-time, Freyberg was the state government reporter for Wisconsin Public Radio.

Among a long list of other reporting awards, Freyberg holds several coveted Chicago Midwest Emmys. In 2007, she was named one of the top journalists in the state by the Milwaukee Press Club. Freyberg also holds a UW Madison School of Journalism Distinguished Service Award.