Look to the stars: Summer of Space is here! - PBS Wisconsin
Skip to content 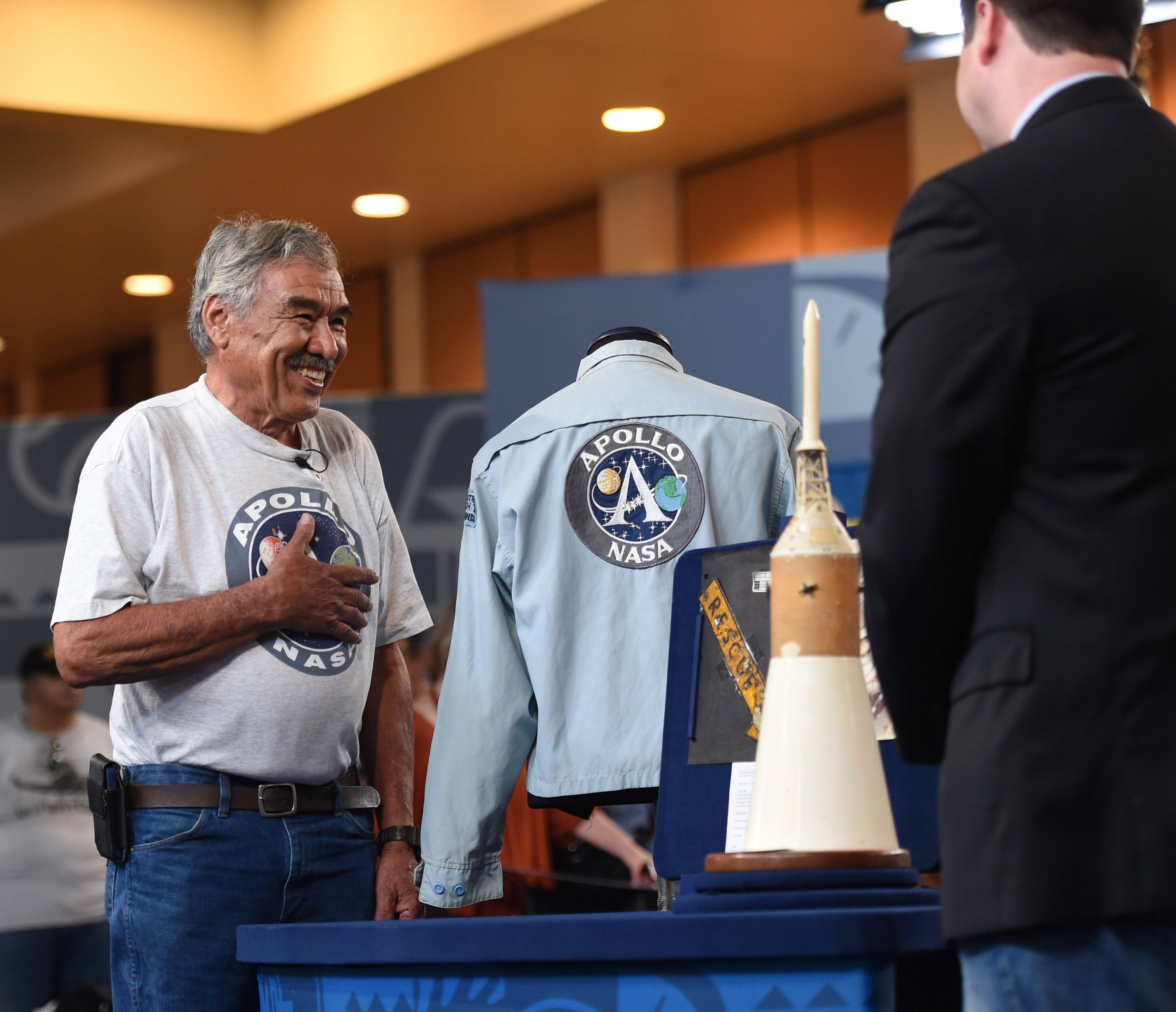 Look to the stars: Summer of Space is here!

As we near the 50th anniversary of the Apollo 11 moon landing on July 20, 1969, PBS brings viewers the Summer of Space: a celestial programming spectacle sure to excite any space enthusiast.

Read on for details of special broadcasts, online exclusives and more!

This Facebook exclusive miniseries explores frontiers in space science and exploration, featuring PBS Digital Studios’ most popular (and space loving) creators: Dianna Cowern (Physics Girl), Matt O’Dowd (PBS SpaceTime) and Joe Hanson (It’s Okay to be Smart • PBS). Take a cosmic road trip with us we as visit some of the most important astronomy research centers across America.

Episode 1: The Mysterious Quasar at the Beginning of the Universe
On top of Mauna Kea, the tallest volcano on the planet, lie 13 telescopes from 11 different countries, making it the premier astronomical observing site in the northern hemisphere. Matt O’Dowd from PBS SpaceTime visits the Gemini Telescope on Mauna Kea to learn about an amazing wonder discovered there in 2017.

Experience the thrilling era of the space race, from its earliest days to the 1969 moon landing. A fascinating mix of scientific innovation, political calculation, media spectacle and personal drama, the series brings the Space Age to vivid life.

The secrets of our solar system have captivated humankind for centuries. Whether gas giant or composed of rock and metal, each of these worlds has a unique past. Each of these stories allows us to better understand Earth.

Join experts as they uncover the truth behind the find of the century; an alleged proof copy of Galileo’s “Sidereus Nuncius” with the astronomer’s signature and seemingly original watercolor paintings that changed our understanding of the cosmos.

Trace the history of women pioneers in the U.S. space program. Some passed the same grueling tests as male astronauts, only to be dismissed by NASA, the military, and even Lyndon Johnson, as a distraction. The program includes interviews with trailblazers as well as the next generation.

Antiques Roadshow
Out of This World
7 p.m. Monday, July 8

Explore the universe of space-themed treasures, including NASA Space Program autographed photos, a 1737 celestial & terrestrial atlas, and a Star Trek treatment, script and letters. Have the values of these stellar finds skyrocketed in the market?

Chronicle the journey of an American hero, born in Ohio, who dedicated himself to a life of duty and public service. From war pilot, to the first American to orbit the Earth to his days in the Senate, it shows the pivotal moments of a man who put country before self.

Meet the pioneering Air Force scientists and pilots whose Project Manhigh, which collected data about the biological and technical factors required to support human activity in space, laid the groundwork for the U.S. space program.

Explore the events that transformed Cocoa Beach, Florida into a center for the U.S. space program. The many launch experiences literally shook the Space Coast community – and the impact is still seen today.

Follow astronaut Scott Kelly’s record-breaking 12-month mission on the International Space Station, from launch to landing, as NASA charts the effects of long-duration spaceflight by comparing him to his identical twin on Earth, astronaut Mark Kelly.

Ancient Skies
Discover how centuries of knowledge, experimentation and engineering helped our ancestors understand the mysteries of space. Expert contributors decode astronomical myths and uncover the science behind their origins.

Combining adventure and the exploration of the human body, Homo Spatius offers unique insights into the physical and psychological effects of space travel on astronauts and measures the impact on medical sciences.

Learn how NASA’s epic Voyager missions, launched in 1977, revolutionized our understanding of Jupiter, Saturn, Uranus, Neptune and their dazzling moons and rings. In 2012, Voyager 1 left our solar system and ushered humanity into the interstellar age.

Enjoy insightful lectures from top experts on space-related topics, including:

Space Junk From the Moon to the Midwest
Lisa Ruth Rand, Postdoctoral Fellow in the Institute for Research in the Humanities at UW-Madison, discusses what happens to the things we leave in space. From satellites that no longer send information to errant screws that were left behind, space junk can reenter the earth’s atmosphere and pose significant risk to people on the ground.

Physics of Space Travel
Clint Sprott, professor emeritus at UW-Madison and leader of the scientific extravaganza The Wonders of Physics, explores the physics needed to travel into space with faculty, staff and students from the UW-Madison Department of Physics.

Exploring Caves on the Moon With Laser Imaging
Andreas Velten, Assistant Scientist, Laboratory for Optical and Computational Instrumentation, UW-Madison, introduces an imaging system which sends laser pulses from a lunar satellite to the entrances of caves on the moon. Analysis of the light “echo” from the caves provides images of the interiors and helps scientists to determine which of the caves could be explored with a lunar rover.

Apollo 13
Chris Henry, staff member at the Experimental Aircraft Association, discusses the Apollo 13 mission. An in-flight explosion changed the focus from a moon landing to a rescue mission. Henry discusses the recent reunion of the astronauts. This lecture was recorded at the EAA AirVenture Museum.

Neutrinos From a Massive Black Hole
Justin Vandenbroucke, Assistant Professor in the Department of Physics at UW-Madison, announces that astronomers at the IceCube Neutrino Observatory at the South Pole have identified one of the sources of origin of astrophysical neutrinos.

Galaxies and Their Monstrous Black Holes
Eric Hooper, Research Astronomer in the Department of Astronomy at UW-Madison, discusses black holes and the computer simulations that show their activity. Hooper talks about the connection between the supermassive black holes and galaxies.

Measuring Gravity Waves With LIGO
Patrick Brady, Professor of Physics at UW-Milwaukee, talks about LIGO, the Laser Interferometer Gravitational-Wave Observatory, which observed and measured the gravitational waves created by a pair of black holes that collided 1.3 billion years ago.

Finding Black Holes in the X-Ray Sky
Karen Lewis, Assistant Professor, Department of Physics, College of Wooster (Ohio), studies x-rays to find the presence of Active Galactic Nucleus (AGN) -a super-massive black hole at the center of a galaxy. Lewis explains how to pick out the AGN from the rest of the universe’s x-ray sources.

Unlocking the Secrets of Why Black Holes Shine
Cami Collins, Research Assistant, Department of Physics, UW-Madison, asks how stars and planets form and why some black holes are the brightest objects in the universe. Collins discusses the underlying physical mechanism which could reveal the answers.